Work on converting a former radio studio into high-end office space and apartments has been placed on hold after the arrival in the building of a colony of puffins.

The birds may be fibreglass rather than flesh and feathers, but they appealed to Rachel and James Murray’s passion for culture and have brought work to a standstill at their site, The Boathouse offices, next to Hull Marina.

The 42 puffin sculptures, which stand 1.5 metres high, have been brought in from manufacturers in Poland to play a starring role in the Puffins Galore! animal trail.

They are now being decorated by professional artists who responded to the brief of telling a story of the East Coast, its local wildlife, green energy and climate change.

The painted puffins will be unveiled on Saturday 2 July at a series of coastal sites throughout East Yorkshire stretching from Flamborough down to Kilnsea, as well as some inland locations including Hull, Beverley, Cottingham and Patrington.

Rachel and James, who have owned the dockside property for more than 20 years, will then resume their renovation work, buoyed by the interest generated in the site by the puffins.

James, an architect, said: “I come from a creative industry and I think art and culture is very important so we were happy to pause our project to accommodate the puffins.

“We remember the Larkin toads and the moths which were created for the Amy Johnson Festival and we have also seen other animal sculpture trails around the country.”

Rachel added: “We are helping to redevelop the marina by renovating the building to create high-quality office and residential space and we wanted to take the opportunity to also support the cultural side of the city and help to promote Hull as a destination.

“I think it’s amazing. You could not have a better creature in this location at the side of Railway Dock. Everybody wants to see leisure projects taking shape – they like to do something creative and they love events.” 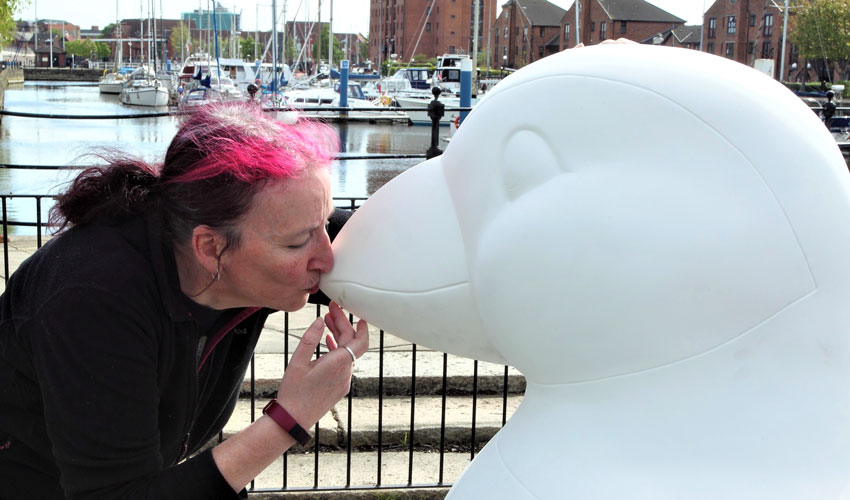 Puffins Galore! was launched with funding from Yorkshire Coast BID and East Riding of Yorkshire Council as part of their drive to boost tourism and increase visitor numbers.

That investment has already enabled the organisers to secure additional sponsorship from more than 40 businesses across the region including the Bonus Group, Cranswick, The Deep, Designs Signage, HETA, KCOM, Sewell on the go, the University of Hull, Wykeland and Strata Holdings, who will deliver the puffins to their new homes.

Clare Huby, a director of Puffins Galore Ltd, said: “The sculptures were due for delivery in March but they are made at a factory in Poland and a lot of the work had to stop because some of the workers are from Ukraine or have family there.

“Our first concern was for the safety of the people. All we could do was be patient and wait until their colleagues could catch up with the work. Our artists and sponsors have been very understanding and sympathetic and we are grateful for that.

“We’re now at the point where I am really looking forward to seeing the puffins in their new homes. Having previously delivered Larkin with Toads and A Moth for Amy we know it will be challenging and tiring but we have a great team working on it.

“The best bit is once everything is out there…  just wandering around, watching people and seeing their reaction. I remember with toads when I was having a bad day in the office and feeling like I was banging my head against a brick wall it was great to just go out and see the crowds of people enjoying the trail.”

Puffins Galore! will run for six months after which all the sculptures will be sold, either to their sponsors or at a grand charity auction. The proceeds will be donated to four charities selected for their important role in the protection of the wildlife of the seas and coasts or for their essential work saving lives at sea.

The charities are the Yorkshire Wildlife Trust, RNLI, RSPB and Hornsea Inshore Rescue.