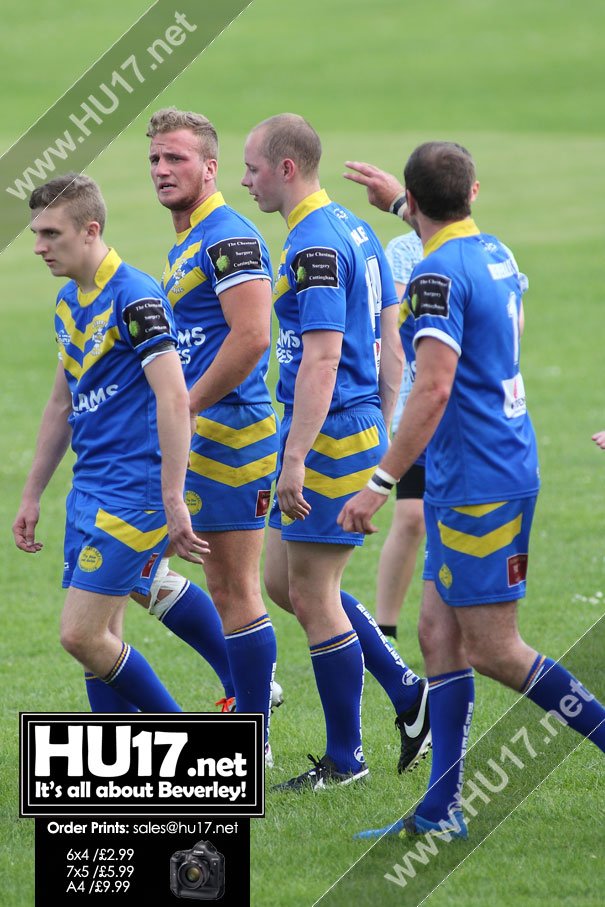 The blue and golds produced their best performance to date this season in the Yorkshire League against a side 2nd in the table prior to kick off.

The result sees them leapfrog several sides in the table to go into third place.

“You will not play a better side this season. At half-time, I asked you to just keep playing the same way and you would take the spoils. You did that and you got what you deserved.”

Man of the match was Lewis Poskitt, whose kicking game crucial in the context of the match, in either forcing line drop-outs or forcing the opposition to start a set of six very close to their own line. This saved a lot of work for the forwards of which Chris Johnson, Jack Howdle, Jack Humphries and Alex Starling were a constant threat grinding out some hard yards against a strong visiting defence.

The York outfit had the better of the exchanges in the opening quarter. The home side had to defend a number of sets close to their own line at this stage. Beverley did get one scoring opportunity off a Glen Anfield interception, but the cover defence came across and dislodged the ball from his grasp. The visitors took the lead in the 14th minute following a break from deep in their own half, which set up the position for their wingert score wide out.

After struggling to create chances early on the hosts finally replied on the 25th minute. Following the awarding of two penalties in succession, the next set saw the ball moved to the right to Glen Anfield. Anfield’s pass found Ben Calvert who came in on an angle to crash over and score. Anfield adding the extras.

Beverley were now growing in confidence and were on the scoreboard again after half an hour. Poskitt’s kicking forced another line drop out and repeat set. The ball was then shipped to the right for Craig Hancock to send Tom Shires over for an unconverted try wide out. The score remained at 10-4 until the break.

There was more pressure early in the second half from Beverley with Poskitt’s deft kicking again forcing a line drop out. The pressure paid off when Jack Humphries evaded a number of defenders to score beside the posts for Anfield to convert. Both sides then had their moments in attack, but both defences appeared to have the measure of each-other. But midway through the half Chris Johnson intercepted a visiting pass 20 meters out to go in under the posts. Anfield tacked on the goal, and it looked as if the men from York now had too much to do trailing 22-4 with 20 minutes to go.

However, it was to be a tense final quarter with the visitors pulling back two tries, both of which were converted in the 66th and 72nd minutes. Both tries were the results of sustained pressure on the Beverley line. As the clock ticked down Lewis Poskitt kicked ahead and was obstructed. The resulting penalty saw Beverley ‘piggy back’ up-field and ensured that the injury time which resulted from dog feces having to be twice removed from the field was spent in the York Acorn half of the field. This hugely relieved pressure.

This Saturday Beverley are on the road when they make the trek to face Siddal ‘A’ kicking off at 2pm. Supporters are welcomed on the bus which leaves Hodgson’s at 11.30am. There is a small charge of £5 for this trip to Halifax.