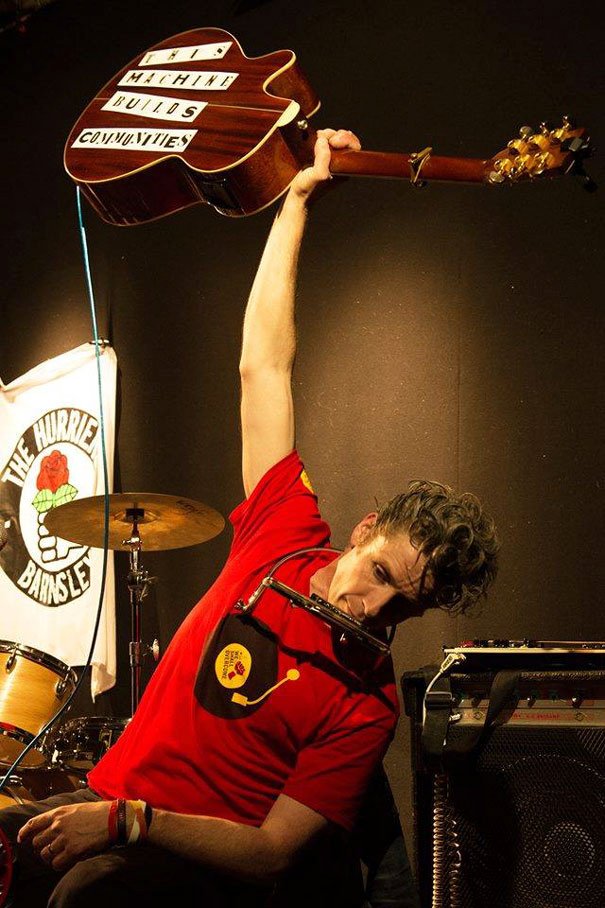 Some of the best local bands from the Hull and East Yorkshire music scene will be joined by a renowned Scarborough performer Joe Solo on July 24th.

Quiet Riot – The Beverley Alternative will be held at Hodgsons Club on Flemingate and this month’s gig features Joe Solo, Street Urchin, The Denim Turtles and The Bard of Holderness (Chris Jordan)

Joe Solo is a musician, writer, historian, broadcaster and washing machine engineer from Scarborough. His musical odyssey began in 1987 fronting a bash-em-out band at school, and has seen him play seven countries either as lynchpin of pop-punk upstarts Lithium Joe or hammering out his unique brand of Folk, Punk and Blues in his own right.

On top of releasing thirteen albums since 2004, Solo has written books and had them written about him; runs a research project on the Hull Pals Battalions in the First World War which he updates daily online; has worked with underprivileged children to help them write their lives in song; and still found time to open for the likes of Chris Wood, Otis Gibbs, Robb Johnson, Edgar Broughton, TV Smith, Paul Simmonds, Justin Sullivan, Emily Portman, Pete Wylie and The Blockheads; whilst his songs have been played by both John Peel on Radio One and Mike Harding on Radio Two.

Live, Solo has a growing reputation as both a performer and raconteur, being both thought-provoking, comical and punch-the-air political often in the same breath. He is not an artist you forget in a hurry.

The spark of Street Urchin was first seen in 2003; it would take another 10 years for the band to form – for that spark to be realised and ignited to something more.

Combining poetic lyricism, rock & roll attitude, alternative indie rhythm and funk-driven bass riffs, Street Urchin draw influences from a range of eras and genres to create a fully original sound – one which needs and deserves to be listened to.

The Denim Turtles originally formed in November 2014 but after multiple lineup changes they finally got things going in April and have played places like The Sesh, Springboard Festival, Bridlington Spa, Beverley Folk Festival and Filey folk festival among many others. The band consists of Sam Mellors on lead vocals and rhythm guitar, Alex Evans on lead vocals and lead guitar, me on backup vocals and bass, and Will Evans on drums. They are currently recording their first E.P of 5 tracks which will be released later in the summer.

The Bard of Holderness is a protest singer who comes from nearby Thorngumbald. His style is a folky/punky skiffle and his songs take sideswipes at those vested interests, corruption and the Tories.

Although his songs have a serious message he likes to sprinkle them with a bit of dark humour and, if the audience has had just the right amount to drink, expect them to be singing along to many of the choruses!

He has played at many folk festivals from as far away as Whitby down to Herefordshire and played at many protest gatherings. His songs have been played on ITV’s Calendar News, WHFM radio and Lonely Oak Radio in California!

“Lithium Joe were a very popular band when I first put gigs on in Beverley back in the 1990’s and Joe Solo has developed a fantastic musical career since this time to become nationally regarded folk singer.”

“We are really looking forward to seeing him and we have another great line-up of performers on the bill to make this another great Quiet Riot gig. We are attracting a regular audience of around 100 people to these gigs so come on down and see what you are missing.”

“We are bringing some of the region’s best musicians to Beverley on a monthly basis. Most of our performers are booked in to play at the summer’s big music festivals with last month’s headliner Danny Landau headlining one of the main stages at Humber Street Sesh on August 1st.”

The gig begins at 8.30pm and this is £5 on the door though £4 advance tickets can be purchased from Minster Records in Eastgate Beverley, The Molescroft Newsagents, Costcutter in Cherry Burton or The Chinese Laundry in Saville Street Hull.

Don’t forget that the night also features the tunes of the ever popular Rebellious Jukebox and continues till 12.45..