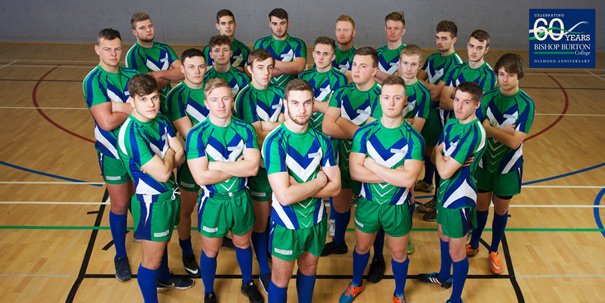 Five tries from Dylan Price helped the Bishop Burton Rugby League Academy team to a 76-6 victory yesterday, securing their place in the National College Cup Final in the process.

The Academy team took the lead early into the match and never let up, playing ruthlessly and powerfully on the attack to breakdown the opposition plays.

Will Bentley scored the first try of the game just four minutes in before Huddersfield New College came back to level the scores at 6-6 soon after.

From that point on it was one-way traffic and Bishop’s Academy players started their advantage with some measured build up play to slip in Ryan Anson for a neat try in the corner.

Zeus Silk broke away from well inside the College’s half to get to the 20-metre line before putting the try on a plate for Dylan Price to grab – his first of five tries on the day.

“We started a bit slow in the first 10-15 minutes but once we kicked into gear we were unstoppable’, said Rob Wilson, Head Coach of the Bishop Burton College Rugby League Academy.

“The team was outstanding. Special mentions for Dylan who scored five tries, Ryan Anson who moved to hooker in the second half and Ben Bloom who scored the try of the game with a 60-metre break.”

Towards the end of the first half, Bishop Burton was in complete dominance. James Oliver scored a rare try before the break and there were more from Ryan Adamson and Josh Poskitt to create a 36-6 gap at half time.

The second half was awash with impressive Bishop scoring: tries from Poskitt, D’Arcy, Bloom and more from Price led the Academy team to a convincing final score victory and a College Rugby League Cup Final match where they’ll play New College Pontefract.

Man of the Match, Dylan Price, scorer of five tries, said, “In the first half I think we looked comfortable but there were definitely things we needed to improve on. We reacted much quicker in the second half.”

“It’s alright to score the tries but as long as everyone does their jobs, and we get through to the Final, that’s the main thing.”