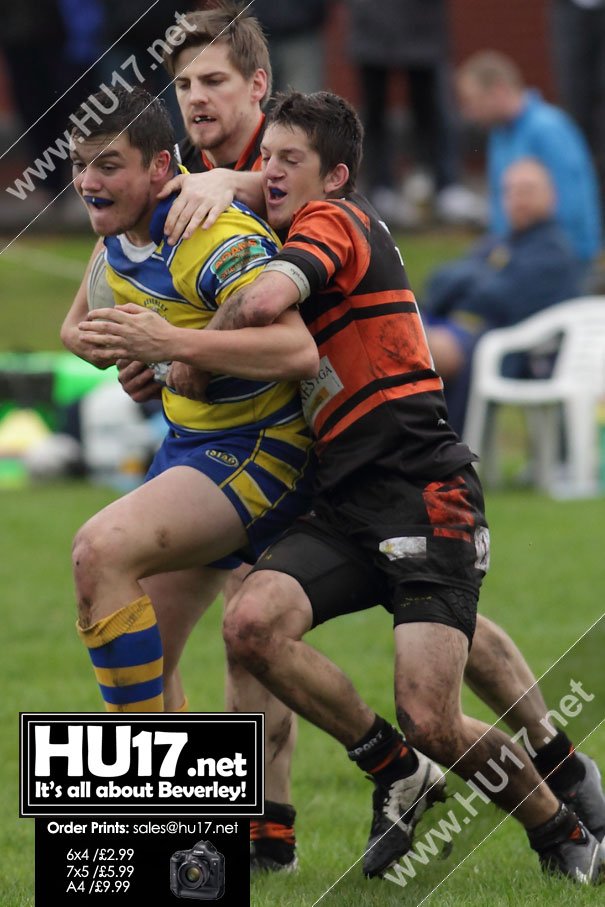 Once again, the depth of Beverley’s squad was put to the test. Full back Lee Falcus was unavailable due to suddenly feeling ill shortly before kick off time. Mike Cooper was also ruled out due to work commitments, and Ryan Watkin had still not recovered from his injury three weeks ago. Pat Howdle’s reshuffle of the side saw Alex Nightingale drafted in at full back. Steve Connolly moved to hooker, and Louis Hubbard moved to second row.

Beverley dominated the opening 25 minutes of the match monopolising possession and territory and when the home side had the ball, they were rarely allowed out of their own half.

In the 6th minute, a smart switch of play to the blind side saw Jack Howdle break clear down the left flank. Will Mail supported perfectly to take an inside pass from Howdle to go over beneath the posts. Howdle converted. Moments later as the Blue and Golds continued to press Howdle spotted a gap on the left hand blind side to go over from the dummy half position.

The conversion was missed, but Beverley continued to press. Indeed, they will be a little disappointed not to have added more points at this stage.

Lambwath countered and a break from deep inside their own half set up the position for them to pull back a try. A kick towards the corner followed and was fumbled to allow the host’s left winger the opportunity to pounce and score wide out. The extras were added. Towards the end of the first, half both sides got a little tetchy with each other leading to a couple of altercations.

The referee found it necessary to send a Lambwath player plus Jake Hart-Fisher and Josh Pooley from Beverley to the sin bin. The scores remained at 10-6 to Beverley at the interval.

The Lions tails were up, and they pressurised Beverley in the early moments of the second half. A few handling errors by the Beverley coughed up possession early in the tackle counts. However, the blue and golds defended well and weathered the storm and ten minutes into the half they got just what the doctor ordered. Jack Howdle broke clear 40 meters out to leave the chasing cover behind and score beneath the posts. Connolly converted.

Beverley continued to grow in confidence and after a penalty gave them, a set of six close to the home sides line they increased their advantage. Louis Poskitt’s quick hands sent Will Mail over for his second try. Anfield this time converted. With the visitors eager to finish the job off Adam Robson broke clear and was unlucky to be pulled up short.

However, a quick play the ball saw the ball shipped to the left for Jack Howdle to complete his hat-trick wide out. The conversion was missed, but both league points were sealed at 26-6 with ten minutes to go. Lambwath were spirited opponents and refused to lie down and pulled back two late converted tries to peg back the score.

Howdle’s three tries and one assist along with a general strong running display got him the man of the match award with Steve Connolly’s lively performance in the number nine shirt a close second.

This Saturday Beverley are at home to Three Tuns in the semi-final of the Tom Beautiman Cup. The clash which pitches first versus second in the table is an eagerly awaited one. A compelling afternoon’s entertainment is anticipated for this 2pm kick off at the Beverley Leisure Centre.