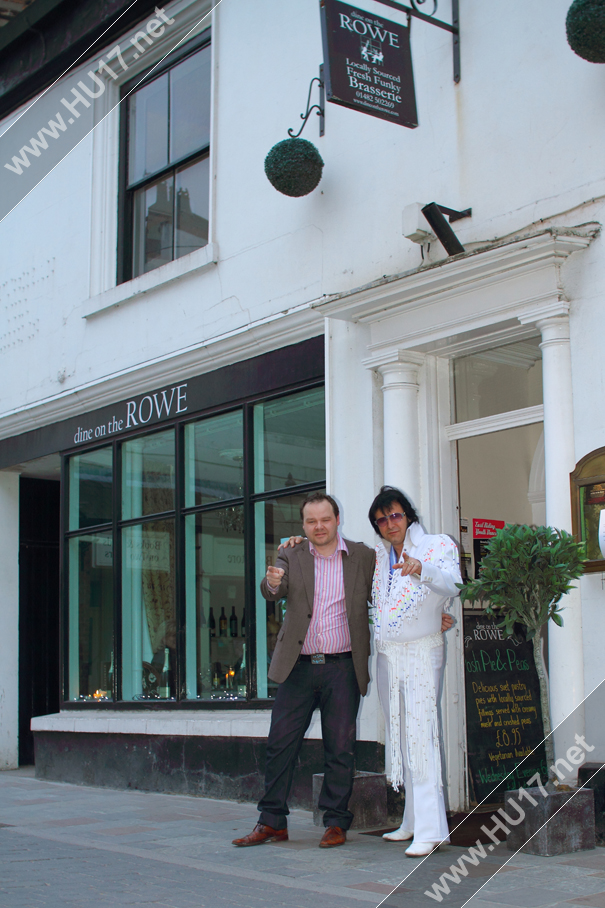 Elvis admitted he was “all-shook up” by the quality of gourmet burgers on offer at Dine On The Rowe’s Ultimate Burger Night.

Elvis Presley tribute act Steve Caprice dined and then performed some of The King’s greatest songs for customers at the popular Butcher Rowe bistro, including Heartbreak Hotel.

The aim of the evening was a celebration of  local ingredients, including local bespoke beef farmer Manor Farm Beef, who only produce one bullock/cow per month and sell locally at Driffield Farmers market and also Anna’s Happy Trotters.

The food as always went down a storm, with the texture and flavour of the burgers described as “amazing”. We were told that chef had hand-chopped the beef for the burgers for  three hours to create an amazing texture.

There was also a great selection of craft beers provided by Roberts & Speight, including small-producer American ales where the creation is all about the hops.

Add to that coffee supplied by The Blending Room of Beverley market, who blend bespoke, single-estate beans, it made for an evening of great tastes, textures and experiences.

The food excitement tied in with a number of renditions from Elvis (one of the most famous burger lovers ever!!!) and it provided for a very special evening of laughs, food and enjoyment.

Executive chef Jason Rowe said: “”Tonight has been great, we’ve had some great feedback about the food and Elvis and we may have some more of these wonderful nights soon.”

Janette Clennett of the Fairy Godmothers, Beverley, who won a meal for two for the evening by following Dine on the Rowe on Facebook said:  “I had a great night out at Dine on the Rowe’s Ultimate Burger night last night as the lucky winner of their draw.

“The food was supreme as usual, however how anyone can call something as gourgeous as the food I ate a “burger” is surely doing it a dis-service as it was beautiful!”