Medieval Beverley, one of England’s leading manufacturing towns in the middle ages, reached down through 600 years of history yesterday, to provide a much-needed boost for its modern-day residents when it was confirmed from a meeting taking place in Germany, that Beverley had been accepted as a member of the Modern Hanseatic League.

Back in the 1300s and 1400s, Beverley was a thriving manufacturing town, the 10th largest in England, with wool, cloth, linen and leather produced here in abundance.

The Guilds (Hanses) and merchants came from towns all over Europe. In 1350 they came together to form the Hanseatic League and established trading links with each other and countries throughout Northern Europe.

There were over 200 towns from 19 different countries trading with the medieval Hanseatic League, and the league came to dominate maritime trade between countries for the next 400 years.

Trade deals between the member towns removed import and export duty tariffs; and Beverley merchants made sure that they were part of it, bringing competitive advantage to the town, opening its markets and allowing it to maintain its position as one of England’s leading towns.

The medieval Hanseatic league lasted for about 400 years, but then in 1980, the Modern Hanseatic League was formed to reconnect the original Hanseatic trading towns across Europe for the purposes of business, tourism, education, sport, culture and friendship.

To be a member of the Modern Hanseatic League, a town has to be able to prove that it was a trading member of the original medieval league, trading with other Hanse merchants.

Hamish Stewart a retired businessman spent his entire career selling British made goods all over the world, including all countries trading in the Hanseatic League. He was encouraged by Beverley Town councillors to set about the challenge of collecting together the evidence that proved Beverley’s trading membership of the Medieval league.

Hamish spent many weeks reading and researching original documents as well as talking to historians, before presenting Beverley’s case to the Modern Hanseatic league in conference calls and emails. 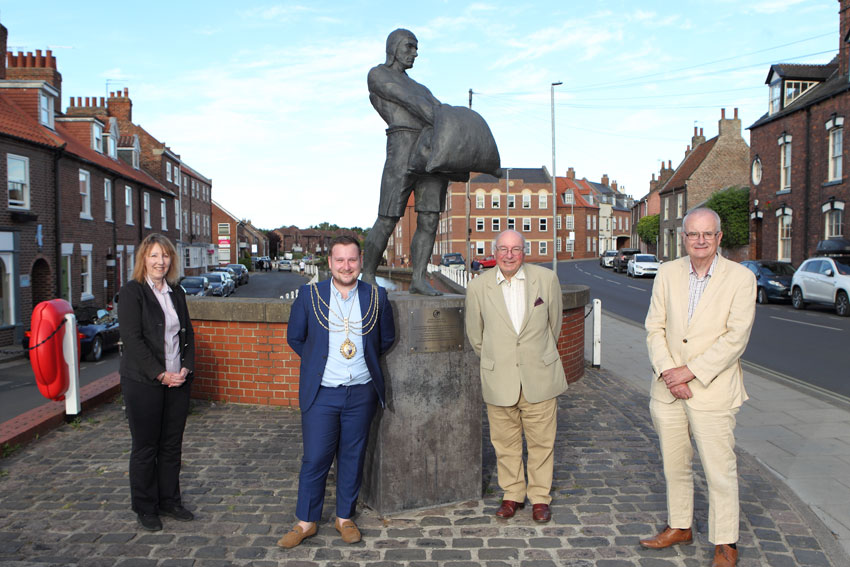 At a specially convened meeting in Germany, it was confirmed that Hamish’s efforts had been successful and that Beverley had been admitted as the 195th town in the  Modern Hanseatic League, the town’s claim for being an original trading member of the medieval league having been proven.

Speaking from Germany, the Head of the Hanseatic League, Stefanie Bischof said;

“The argument that Beverley used to be a production place for fabric and cloth that was traded with Hanseatic merchants, with direct trade links to Hanseatic ports has been convincing, and I can  confirm that Beverley’s membership of the Modern Hanseatic League has been approved.”

“I am delighted to hear about the success of Beverley in being admitted to the Hanseatic League. This is a very important initiative which will raise the tourist and commercial profile of our historic town.”

“I can’t thank Hamish enough for the huge effort he has put into researching and proving Beverley’s historical trading membership of the medieval Hanseatic League.

This decision has some very significant tourist benefits because  Beverley’s profile will now be raised among those 194 other European towns, with visitors wanting to come here once this terrible pandemic is behind us.

“The Hanseatic League encourages people in its member towns to visit, study and work in the other towns. They arrange sporting fixtures and educational visits to learn about each other’s culture.

Beverley’s schools, colleges and young people’s organisations can only benefit from developing links with similar educational establishments and organisations across Europe.

“2021 is going to be an exciting year as Beverley starts to benefit from the huge potential that membership of the Hanseatic League gives us, and we will also be celebrating the 1300th anniversary of the town’s founder St John of Beverley next year too.

“The Hanseatic news gives us real hope and confidence to look forward to next year when we hope that tourism will return, trade will thrive and the old normal that we all cherish is once again part of our lives.

On behalf of Beverley town Council, thanks to the Hanseatic League for admitting Beverley to membership and to Hamish for everything he has done to get us there.”