St Mary’s Primary School in Beverley has been pushing the Bike Smart message to students as part Road Safety Week.

Road Safety Coordinator at St Mary’s School, Wendy Copley says the week as part of their ongoing commitment to promoting road safety in the school.

The school also has a special banner on display after year five pupil Anna Bruton.  She said that she was over the moon to win the competition by designing a poster featuring a bike.

Wendy says the school are active in promoting bike safety in the school, she said;

“Every student in our school knows about doing the M Check.  They know to check their tyres are pumped up, that their seat is at the right height and the brakes are working.”

“More importantly they every pupil wears a helmet when using their bike.”

“Throughout the darker months, we do special incentives. We want them to wear cycle helmets, use lights and make sure their bikes are roadworthy.” 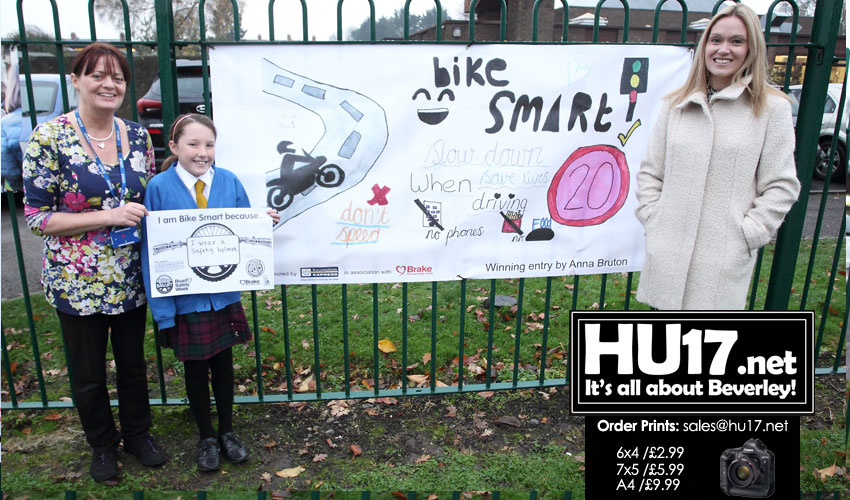 Wendy says the response by pupils and parents on bike safety is positive, she said;

“We are really lucky as parents are really onboard with everything we do. They even join us on our safety walks, Park and Stride from Tesco every year.”

“Students are not allowed to bring a bike into school unless they have a helmet. Bikes are also subjected to random tests by visitors from county hall to make sure they are fully roadworthy.”

Road Safety Week is a national incentive that is run by the charity Brake. The week is used to promote life-saving messages in schools and other similar organisations.

Each year the theme is changed with Bike Smart being the chosen theme for this year. The charity also says that with more people using bikes on our roads safety has never been more important.

Figures show that a third of all the people who are killed on roads in the UK are on a bike. While cyclists are urged to take precautions, drivers of cars are also being encouraged to become more bike aware.

Click Here
Tuck Into A Thomas’ Pasty This Veganuary In Beverley