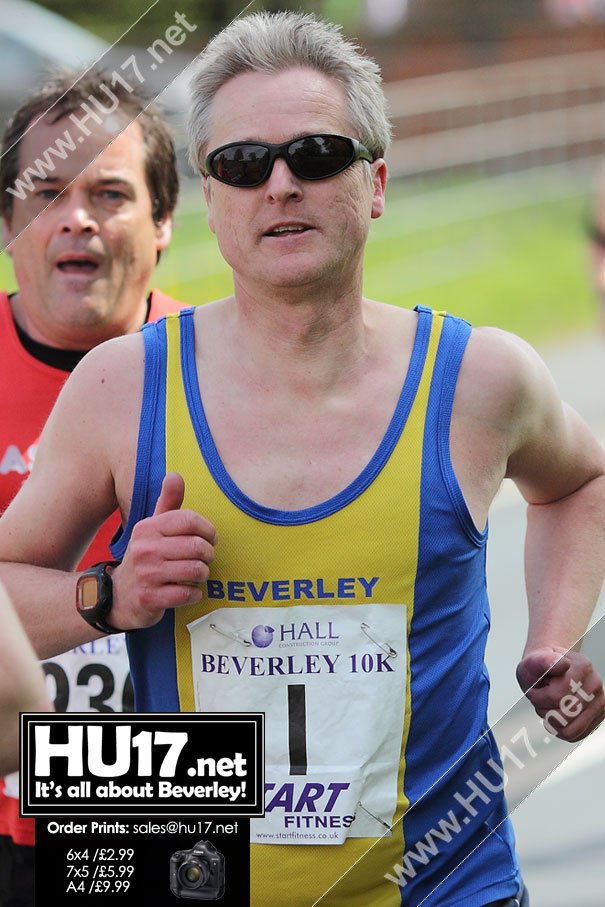 Beverley AC says they are delighted with how this signature event, the Beverley 10k went this weekend.

Andy Tate the past 23 years has been the race director was handed the coveted number one shirt as he ran the course for the first time.

“It was almost perfect conditions running. As we headed out of Beverley, there was a slight headwind and when we returned into the town the wind was behind us.”

“I was really impressed with the number of people that come out to support the runners not only in the centre of the town also along the route of the course.”

“As I ran down Toll Gavel towards the finish line I was met by crescendo of noise. It really was a great experience to take part in the race.”

While Mr. Tate did not win the race, he did finish with a time 44.56. The overall winner was Phillip Ted from Thames Hare and Hounds won the race for the third year running finishing with a time of 33.02.

Carla Stansfield a former member of Beverley AC was the first lady to cross the finish line improving on her previous year where she finished second.

Ms. Stansfield finished with a time of 36.40 said after the race;

“I’m really pleased to be the first lady back today, what’s more I’m really chuffed to pick a check up to £200 for victory.”

“On behalf of Beverley AC, I would like to thank everybody who came out to support the runners throughout the route, all the people who entered the race and the key sponsors, Hall Construction Group and B&A Scaffolding.”

Organisers of the run say 1550 people entered making it the biggest field in the event’s 23 year history.

When asked why more and more people are looking to take part in the event Mr. Tate said;

“There are a couple of key factors, one of the main ones is a national incentive the park run where each Saturday at 9 AM, runners can attend events are held throughout the country.”

“In the East Riding, they held at Sewerby Hall and in Hull, they are held in East Park where is not uncommon for 500 runners or so to take part.”

“It is events like this that encourage people to take the next step and increase the distance from 5 km to 10 km with some of these runners then going on to join local running clubs.”

Beverley AC will be hosting the next event in July, which is the Walkington tank only. Anyone wishing to take part in the race can visit the club’s official website with full details of how to enter can be found.