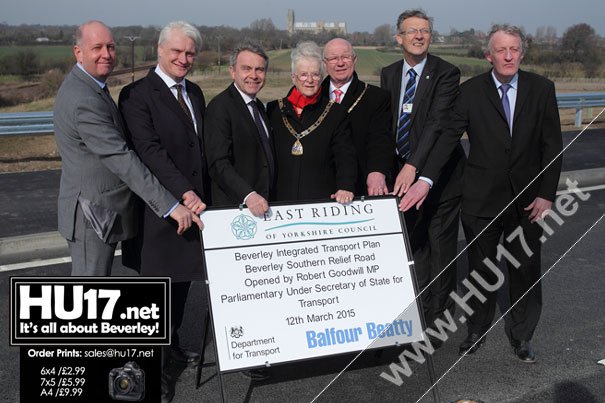 A key part of the £22 million Beverley Integrated Transport Plan was officially opened today (Thursday 12 March) by the Parliamentary Under Secretary of State for Transport, Robert Goodwill MP.

The town’s southern relief road –named Minster Way- will be opened to the public this afternoon. The 2.8km stretch of new road is forecast to carry 13,000 vehicles a day around the south of Beverley, and will reduce congestion and improve traffic flows in the town.

The main contractors for the road were Balfour Beatty, and the funding for the whole Beverley Integrated Transport Plan – which includes the southern relief road, the new Grovehill junction, additional lane at Swinemoor Lane roundabout, and the reclassification of the road network in and around Beverley – came from the Department for Transport (£16.3 million) and East Riding of Yorkshire Council (£5.2 million).

The new road runs from the A164 Victoria Road roundabout around the south of Beverley to the A1174 Hull Road. The Beverley Integrated Transport Plan represents one of the largest capital investments ever undertaken by the council.

Councillor Stephen Parnaby OBE, leader of the council, said: “This is a very significant day for residents and motorists alike in Beverley, and I am delighted that we have arrived at the opening of this hugely important stretch of new road.

“The council was keen from the outset for local companies to share in the delivery of this scheme to provide a boost to the economy and I am very pleased that Balfour Beatty  have used local expertise and materials to provide work experience and placements to help our local young people improve their skills and employment prospects.

“I would like to thank our residents, motorists and the travelling public for their patience and understanding. All of these groups will benefit from improved transport infrastructure for decades to come.”

The main objective of the Beverley Integrated Transport Plan is to reduce through-traffic volumes in the town centre, with streets such as Keldgate estimated to see a decrease of 60 per cent. The traffic model for the project also predicts traffic volume reductions on Victoria Road, Queensgate,  Hengate and Keldgate.

Traffic volumes on Swinemoor Lane are predicted to increase, due to through traffic using the new relief road. In order to manage this additional traffic traffic on Swinemoor Lane and Hull Road,  the Beverley Integrated Transport Plan included significant amendments to the Grovehill roundabout, which has been enlarged and is now a signalised junction with a computerised signal management system that senses traffic flows and speeds to optimise the sequencing, thereby maximising the volume of vehicles through the junction.

After cutting a ribbon to declare the new road officially open, Mr Goodwill travelled to Market Weighton to inspect progress on the new £1.1 million roundabout acting as the intersection between the A1079 and the Holme Road, which is scheduled to open in April. The scheme, designed and managed by council engineers, was made possible by a successful bid by the council’s transport policy team, to the Department for Transport’s £170m Local Pinch Point Programme.

The scheme will alleviate congestion for residents of Market Weighton and Holme-on-Spalding-Moor onto the A1079 as well as improving road safety at the junction, where there have been 14 casualties in the past five years.

Councillor Stephen Parnaby OBE added : “Thanks to excellent financial management and a proven track record in delivering major transport initiatives, the council was able to secure a six-figure sum from the Department for Transport’s (DfT) Local Pinch Point Fund, with the remainder of the funding coming from the private sector.

“When complete, the new roundabout will improve safety and accessibility for residents of Market Weighton and Holme-on-Spalding-Moor onto the A1079.”

Hull-based construction company Wright Civil Engineering Ltd are contractors for the scheme. The new roundabout will complement other highway projects, including a similar roundabout at Hodsow Lane, Pocklington, and a link road to Pocklington Industrial Estate and the new Broadhelm Business Park.