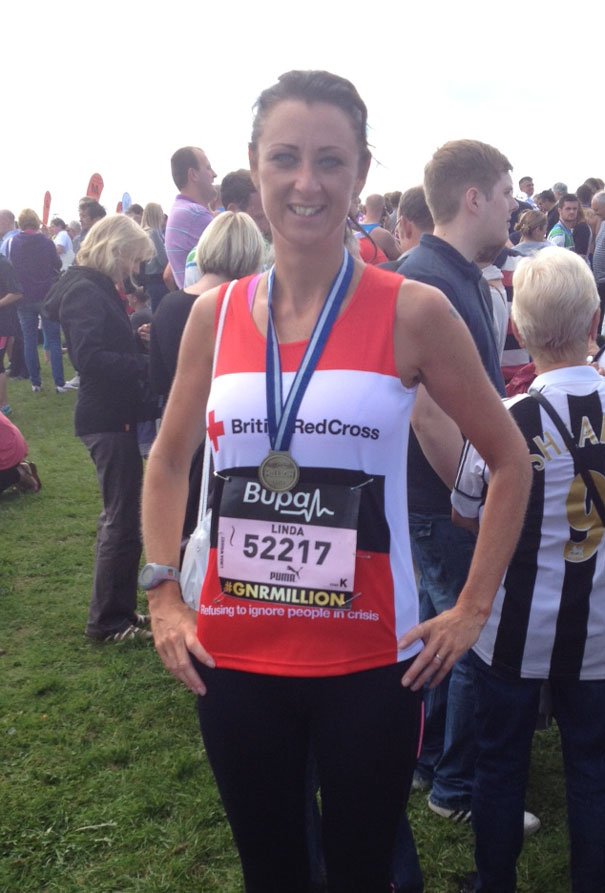 Beverley woman, Linda Wright, has changed her life and swapped lazing on the sofa for seemingly endless hours running in the cold and wet in preparation for the ultimate running challenge. And she hopes to raise £3000 for the British Red Cross into the bargain.

By day Linda (40) is helping teachers find jobs in her role at The Education Network in Hull. By night, weekend and early mornings, she is now dedicated marathon runner.

Linda now has two missions that she is passionate about: to complete the London Marathon on 26 April; and to raise as much money for and awareness of the Red Cross.

“Twelve months ago I was a couch potato! I decided in 2014 that I would change my life and get active. So I took up running. And I got so keen that I started to enter Events.

This culminated in me completing the Great North Run in September in a very respectable 2 hours (for a 40 year old female runner nine months into her running!).

But it does look after a lot of people in varying difficult situations both at home and overseas. From UK Flood Victims to those suffering from Famine in Africa. From Refugee’s in war torn Syria to the elderly at home in Britain. It’s a wide ranging charity and that’s why I ran to raise money for them.

In January of this year the Red Cross got in touch with me to tell me a runner had dropped out of the 2015 London Marathon and would I like their place. I really wasn’t sure – the furthest I have ever run is half that distance, and there was only 120 days to prepare for it.

However, the London Marathon is the pinnacle of every amateur runners bucket list in the UK. So I said YES!”

“Linda’s journey from sofa to sponsored marathon runner is brilliant. Her enthusiasm about running and raising money for the work of the Red Cross is infectious – she’s even inspired me to get out running again!

We’re massively grateful to Linda and everyone who is running for the Red Cross, to allow us to run to help people whose lives have been devastated by disasters and crises.”

Inspired by Linda? Want to dust off the running shoes and take part in events like the London Marathon and Great North Run, rather than watching them over breakfast on TV?

The Red Cross needs more runners and has places on everything from 10ks to marathons. Visit www.redcross.org.uk/Runs to find one for you.

Linda can be sponsored at www.virginmoneygiving.com/LindaMarathon