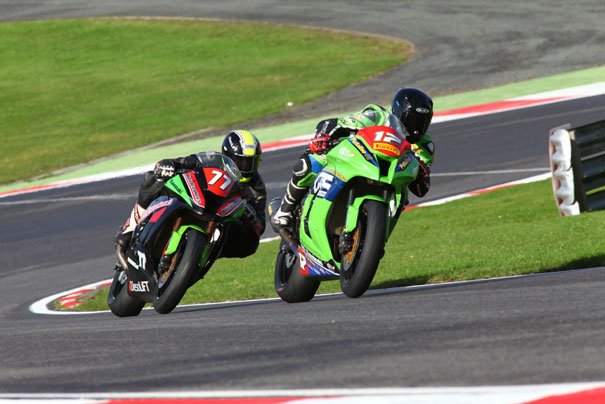 Three G&S Racing Kawasaki riders travelled to Brands Hatch for the final rounds of their respective championships resulting in a strong seventh place for Kevin Van Leuven, 16th for Dominic Usher and an unfortunate crash for Tom Fisher who was taken out on the first corner of his race.

Despite missing out on track time because of the weather, Dutch rider Kevin Van Leuven rode well to complete his qualifying in sixth place in the Superstock 600 class. In a highly competitive race, Kevin held on to his 6th place through the first few laps but was beaten back to 7th on lap five.

Although he was very close to the rider ahead he was unable to make a move on him and took the chequered flag in seventh place to pick up a further nine points which takes his total to 57 and places him joint 10th in the overall championship table. Considering that Kevin had to learn his way around every circuit before getting up to speed it is a credit to his talent that he was able to finish this high up the standings.

Beverley rider Dominic Usher qualified well in 14th place in the first session but sat out final qualifying because of the weather as there was nothing to be gained on a wet and slippery track and a lot to lose if he were to crash. He began his campaign from the fifth row but was caught up in the usual melee at the first corner and was pushed back to 19th.

However, by lap three, he began to make a move forward and by mid race distance was up to 16th place. Although he was not far away from the rider ahead he was unable to get on terms with him and finished the 14 laps in 16th place just outside the points. Dom ends his 2014 campaign in 16th place on 29 points.

Tom Fisher was riding well, again lack of track time didn’t help his cause, but he posted some respectable lap times riding faster than the last race at Brands Hatch in July. However, as the race got underway, another rider fell and took Tom with him as they rounded Paddock Hill on the first lap. It was a sad end to what was looking to be a promising race for the Nottingham rider.

Prior to the Brands Hatch race, Tom competed in the Stars at Darley races at Darley Moor last week where he completed the two races in sixth and seventh place being the first Superstock bike over the finish line each time. This gave him a much-needed confidence boost ahead of the season finale, but the crash meant that he was unable to build on the experience gained at Darley Moor.

“Kevin rode extremely well again this weekend. To finish in seventh place was a good result for him, although I do believe he deserved an even better result for his efforts. Kevin came to the team knowing he had to learn his way around all the different circuits as he had never ridden in the UK before.”

“The only circuit he was familiar with was Assen, and this showed in his results at his home track. He has proven he has the ability to run at the front and will return next year to build on the progress he made in 2014.”

“Dominic has had a good season and produced some solid results for the team. The poor weather conditions during qualifying denied him some valuable track time this weekend, and then he was boxed in at the start of the race falling back down the field. but he didn’t give up and fought his way back up to 16th.”

“It’s a shame he couldn’t quite manage a point’s finish, but he did so well and will come back strong next year.”

“Tom was so unlucky today. He has made some big steps forward this year after stepping up from the 600 class to the big bike.”

“He was posting lap times in the 1m 29s this weekend which last year would have seen him up in the top 10, but the series has moved up a gear this year, and everyone is going that bit faster.”

“Now the season is over Tom will have some more treatment on his injured thumb over the winter layoff and hopefully will be A1 fit for the start of the 2015 campaign.”

“I would like to convey my thanks to all the sponsors and supporters who have helped our team this year and who have agreed to support G&S Racing Kawasaki into next season.”