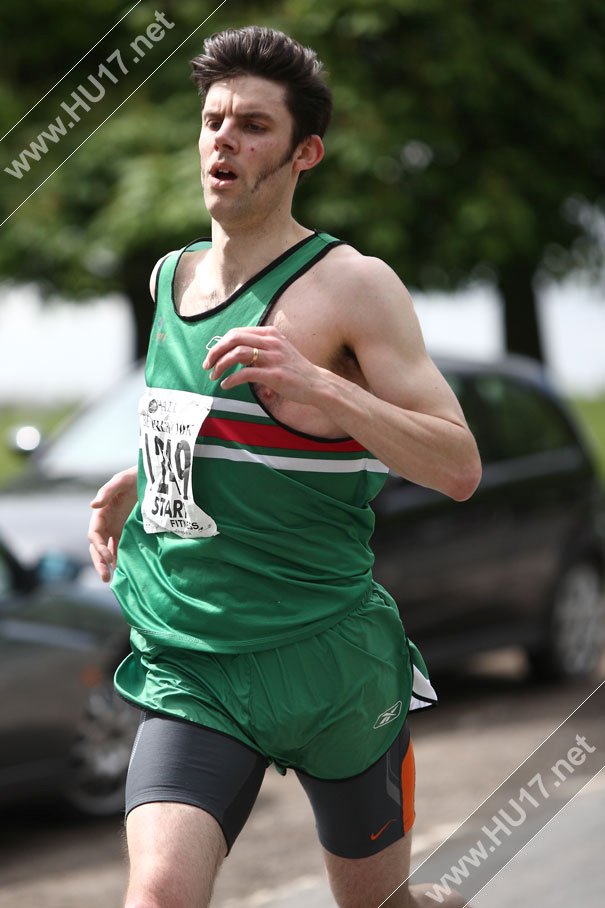 There was a great atmosphere in Beverley last Sunday when a record 1240 runners completed the twentieth Hall Construction Beverley 10k.

Although rain threatened throughout the morning, it held off and participants and spectators enjoyed bright, if windy, conditions. The centre of Beverley was packed as hundreds lined the finishing straight from Saturday Market to Wednesday Market. Many others cheered on the runners as they returned to town over the Westwood. Rousing music from Beverley Brass band helped spur on weary legs for the last couple of hundred meters.

All the local running clubs were represented in the race, with many runners coming from further afield as the reputation of the race for a friendly atmosphere and a fantastic finish through the streets of Beverley has grown over the years. Several hundred unattached runners also took part, some of them running in fancy dress to raise funds for charity and some using the race to achieve their first ever 10k finish. Martin Hall, whose organisation sponsors the race, ran wearing the number one vest. Marking the twentieth anniversary of the event, a special logo was designed by Longcroft student Corey Vivien to appear on the medals and t-shirts awarded to competitors as they completed the event.

The race was won by Phillip Tedd of Sale Harriers in 32:43, in his first attempt at this race. Based in Leeds, Tedd was encouraged to compete by a friend who lives locally. He was chased to the finish by Steven Bateson of East Hull Harriers, who finished in 33:04. In third place was Jim Cooper of Harrow AC, crossing the line in 33:34.

After the race Tedd said that ‘The course was great, and a couple of shortish climbs made it a little testing. It was very picturesque although to be honest I didn’t appreciate that whilst racing! The support was fantastic, absolutely stunning to come down Westwood pastures into the town, it really inspired me to push for the line’.

The race was led for the first couple of miles by Jordan Mounsey (Kingston upon Hull AC). Tedd made his move at around half way round the course. He commented that ‘I was quite worried it may have been too early but having only done a couple of 10km races I wanted to try and get clear before the end was in sight … I went for broke on turning into the square because the atmosphere was incredible’. Tedd is keen to race again next year, praising the race organisation, the encouraging marshals and the event’s friendly atmosphere.

In the women’s competition, Helen Cross of Pocklington Runners carried off the first prize, crossing the line with a time of 38:11 and in an impressive 38th place overall. Cross finished 45 second ahead of the second female finisher, who was Beverley Wilson of Cleethorpes AC. Wilson finished the race in a time of 38:53, around 2 minutes ahead of Beverley AC’s Carla Stansfield, last year’s winner of the women’s race, who this year finished third at 40:49.

In the men’s team competition, the winners were Kingston upon Hull AC. The team included Gregan Clarkson, Jordan Mounsey and Rob Hodges. The runners up were East Hull Harriers.

Veteran prizes were awarded for all the standard age categories. Beverley AC’s Mark Dalton came first in the V50 category, crossing the line in 20th place overall in 36:25. In the V55 category, Gavin Dalton of City of Hull AC took first place in 37:13. In the women’s age categories, Amanda Dean of West Hull Ladies was first in the FV50 group, at 42:43, and Sue Haslam of Scarborough AC won the FV55 category in a time of 42:14.

There was a total of 61 runners over the age of 60 recorded in the results, which was twice as many as the previous year. Simon Richardson of Pocklington Runners was first in the V60 category in 39:08, and Neil Scruton of Scarborough AC claimed first prize in the V65 category, in 39:08. There were just two runners in the V70 category, and the fastest was David Scott of Barton& District AC, who finished the race in just under an hour, at 59:26. East Hull Harriers’ Shirley Oglesby won the FV60 age group in 50:30, and Pocklington Runners’ Jackie Robinson was first in the FV65 category, finishing in 56:33.

At the other end of the age range younger athletes, many taking part in their first 10k, put in some impressive performances. Several represented Beverley AC, some moving up from the fun run they’d completed in previous years to compete at the longer distance, and many doing very well. The first under 18 male was Sam Dickinson, who completed the course in a very fast time of 36:14. He was followed by Beverley AC’s Harry Powell, at 38:13. Ethan Dalton, also of Beverley AC recorded a personal best of 38:36. Alice Greswold was the first under 18 female finisher, with a time of 44.21. Nicole Dawson of Beverley AC was second, in 45:50.

Most members of host club Beverley AC were needed for marshalling duty, so the club fielded a smaller team than usual. The first Beverley member to finish was James Pearson. He was seventh overall in 34:37. Lewis Holloway, at nineteenth place overall, was the second Beverley runner to finish, his time of 36:21 nearly a minute faster than his previous best. He was closely followed by Mark Dalton. Luke Davison put in a good performance as a new member running this race for the first time, achieving a time of 37:48 and in thirty third place.

Carla Stansfield was followed over the line by new member Laura Egan, who finished in 128th place in 41:58. Nicole Dawson came next, while the fourth Beverley female runner was Emma Greensmith, completing the run in 45:49. Beverley AC’s former press officer Kay Farrow returned from Mauritius to take part in the race, and finished in 58:24.

Also running was Oliver Johnston, who is returning to the sport following a 19 month period of recovery from a serious traffic accident in Spain. ‘Beverley is my home town and when I was doing weight training and rehab work it gave me something to work towards’, Olly said. He defied the predictions of his doctors by completing the race in under an hour, at 57:59, an amazing return to the sport which had been such a big part of his life before the accident.

Many unattached local runners reported on how much they enjoyed the day, how well organised the race was, and that they were thrilled to achieve personal best times. The race atmosphere was said to be the best yet, and they proudly wore their medals all day.

Beverley AC would like to thank all the organisations and individuals who supported the race and contributed in a number of different ways. Hall Construction sponsor the race and also provided road signage on the day. Other supporters include Kingston Communications who provide first prizes, Riverside Motors who provided the lead car for the race, and Tesco, who provided bottled water for competitors. Sweetlands, Boyes and the Body Shop provided spot prizes, Malcolm Pattison supplied fruit for competitors, and Strawberry designed the publicity and race information. Thanks are also due to Mark Henderson of Sport Systems, Start Fitness, Beverley Leisure Complex, St. John Ambulance, Humberside Police, Beverley Brass Band, Warners Sports Medicine, Rod Towse of EYRC Traffic Management, and to the hundred or more volunteers who acted as marshals on the day.

The next race organised by Beverley Athletic Club is the Airkool Walkington 10k which takes place at 7.30pm on Friday, July 12. There is also a 1.75 mile family fun run at 6.45pm. Entry to both races is online only at www.sportsentrysolutions.com/allraces.php. The closing date for entries is Friday June 15, or earlier if the limit is reached before then.

The Club is also organising exciting new off road races. The College Canter will be held at Bishop Burton College on Sunday September 29, and will include races of around 3 and 7 miles. Full details will be available soon from the Club website www.beverleyac.com.

While runners in the Beverley 10k were preparing themselves for their race, nearly 230 fun runners lined up on the Beverley Leisure Complex playing field for the start of the B&A Scaffolding Fun Run.

Runners of all ages completed the race, including 21 juniors from Beverley AC and representatives of many local clubs. They were joined by Bertie the Beaver who encouraged them all around the 2km course.

The race was won by an unattached runner, Robbie Brown, in an impressive time of 7:41. The second placed runner, Luke Chapman of Hull Achilles, came in almost a minute later at 8:35, and third place was taken by Joe Maw in 8:50. Beverley AC juniors put up a strong show, with five runners in the top twelve places: Oliver Douglas, Edward Prew, Morgan Dennis, Jonathan Dennison and Taylor Arnott.

Lauren Garwood was the first female finisher, crossing the line in 8:57. She was followed by Morgan Dennis of Beverley AC just 15 seconds later at 9:13, and in third place was Lizzie Rank of Morpeth Harriers in 9:25.

The runners relished the challenge of completing the race and clearly enjoyed the atmosphere. They were cheered home by enthusiastic spectators, and deserved the specially designed medals they were awarded once they’d crossed the finish line.