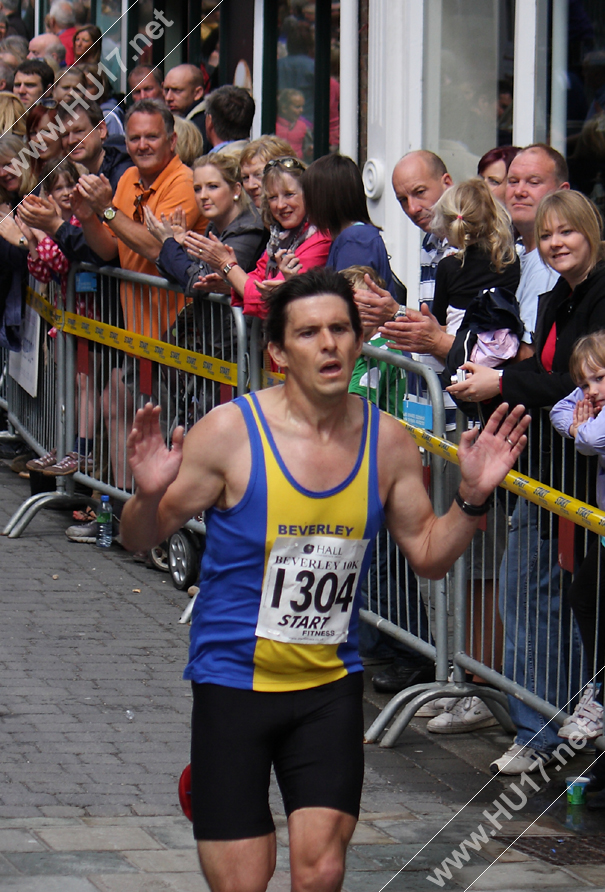 More than a thousand runners gathered in Beverley last Sunday to compete in the annual Hall Construction Beverley 10k road race.  All the local running clubs were represented and there were also several hundred unattached runners, some of them running to raise funds for charity.

It was a warm and bright spring day and with bands providing entertainment at the leisure centre, Saturday Market and Angel Square there was a carnival atmosphere in the town.

Hundreds of spectators lining the finishing strait along Toll Gavel and Butcher Row cheered Darran Bilton as he romped home in 32:39, almost two minutes ahead of his nearest rival, to win the race for the second year in succession and for a record eleventh time.

Bilton looked comfortable at the finish but admitted after the race: “There’s never an easy win.”  He takes nothing for granted and has great respect for the rest of the field.

Although an under 18 runner, Joseph Smith, ran step for step with Bilton for the first mile the youngster could not keep up after that.  By the time the leaders had got to the two mile point, Bilton had opened up a gap of 30 seconds with the rest of the field led by Phill Taylor of Bridlington Road Runners.  Taylor ran well but was no match for Bilton and finished in second place.  Smith was seventh in 35:36 and won first prize in the under 18 age group.  With more experience he will be able to mount a serious challenge in the future.

There was a battle for third place between two of Beverley Athletic Club’s fastest men, James Pearson and Rob Snaith, with Snaith coming out on top.  He was in thirteenth place as the leaders left Beverley but by the time they got to Walkington he had moved up to fifth.  He caught up with Pearson in Saturday Market and pushed ahead, outsprinting Pearson in the finishing strait.

The men’s team prize went to Beverley with ninth placed Mark Dalton making up the team with Snaith and Pearson.  Bridlington Road Runners were runners-up.

The first lady to cross the line was Beverley Athletic Club’s Melanie Hayward who led the ladies competition from the start.  She has raced very little during the last two years due to injury and was pleased to be competing again in Beverley.  She completed the course in 37:52, in 24th place overall and almost a minute ahead of second placed Holly Gilbert of Victoria Park Harriers.  Elaine Storey of City of Hull was third in 39:32.

For the second year in succession the ladies’ team prize was won by City of Hull.  Elaine Storey, Rebecca Fielding-Smith and Charlotte Ward made up the team.  Beverley ladies finished second.

Host club Beverley Athletic Club fielded a strong team which included eight current and former members of their junior section.  Coach Neil Sergeant was proud to see his protégés taking part in the 10k.  Four of them were members of the Arnott family – Jordan, Corey, Kelvin and Kendall.  The younger Arnott children, Taylor and Dayna took part in the fun run.

Martin Hall, Chairman and Managing Director of Hall Construction Group, the race sponsor, took part in the race as usual.  He put in a very strong performance to finish in 44:07, almost two minutes faster than last year.

New to the race this year was entertainment in the finishing strait.  Rockhouse, a 70s classic pop and rock band, played in Angel Square.  Lead singer and Beverley Athletic Club member Tony Hunter said that the band had had a great time, “We got people singing and cheering the runners on.  It was great, people were in a fantastic mood.”

Full results and photographs are available from www.beverleyac.com .

The next race organised by Beverley Athletic Club is the Airkool Walkington 10k and fun run on Friday 8 July 2011.  For further information go to www.beverleyac.com .