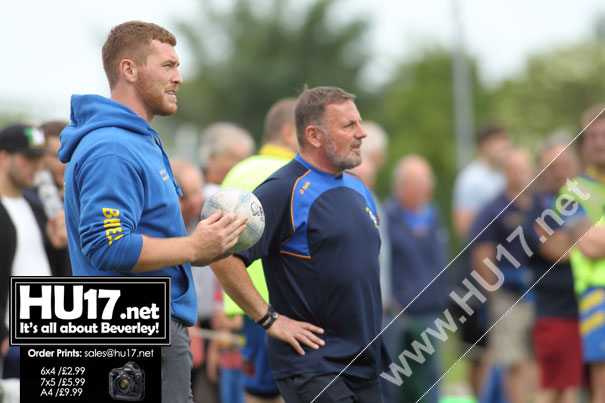 The blue and golds bowed out of the Yorkshire Premier League play-offs at the semi-final stage, but with their heads held high as they reflect upon three seasons of solid progress.

Pat Howdle speaking after the game said; “From where you came from just three years ago as a struggling Hull & District outfit to now be contesting Yorkshire Premier League play-offs you can be proud off yourselves.”

His assistant Scott Taylor added; “There is much to build on for next year. We will have a little rest, have our sports dinner in November and get back in training and look to go at least one better next year and get to the Grand Final.”

A cracking start in a match could not have started any better for the visitors. They got the ball from the kickoff played out a quality set. This ended in a kick down field that failed to be dealt with by the hosts full back that allowed the ball to bounce. Glen Anfield chased the kick to pounce and score with only a minute on the clock. Josh Poskitt added the extras.

West Bowling then countered, and it took a last ditch tackle from Billy Riby to keep them out. However, as a ball was knocked down by the visitors, a repeat set followed and Chris Anderson was on hand to score a try that was improved to level things up at 6-6.

Beverley again took the game to the home side and narrowly failed to score. A smart blind side move saw Jack Humphries send Josh Poskitt only for the wingman to be forced into touch at the last moment.

On the 26th minute, Beverley were rewarded. Man of the match Alex Calvert got a pass away to skipper Tom Radley, who escaped the cover momentarily, but as it closed in Tom Shires supported superbly to take a pass and score a try that was not converted.

Beverley nearly added to their 10-6 lead when a dangerous break by Billy Riby saw him get a pass away and as the move continued a cross-field kick saw Tom Radley chase to touchdown. Unfortunately, he was ruled offside. Having absorbed the pressure the hosts got down field and full back Liam Cole joined the line to score. The extras were added to level thing up at 10-10.

With the minutes ticking away to the interval, Lewis Poskitt’s kick forced a line drop-out leading to more pressure to the home side were equal to the task in defence, Beverley threatened early in the second half as a cross-field kick again saw Josh Poskitt catch the ball only to held up short. As West Bowling again countered in attack, it took another timely tackle from Billy Riby to deny a try.

However, they forced a line drop-out from a kick on the last and pressure told as Liam Garner scored from the resulting repeat set. The conversion was not added but there was to be more.

Some sketchy defence from Beverley allowed West Bowling to break from deep in their own half. Off the same movement, Jack Milburn scored despite the best chasing efforts of Radley to stop him. The extras were added for West Bowling to lead 22-10.

There then was a glimmer of hope for the visitors as possession was spilled by the home side. The next set saw the ball move to the right for Chris Johnson to get a pass away for Pete Starling to score out wide, but the conversion could not be added.

West Bowling again looked dangerous as they continually asked questions of the Beverley defence, and yet more line drop-outs were forced. There was another attacking opportunity from Beverley when Lewis Poskitt’s neat chip into the in-goal area almost saw Pete Starling get a hand to the ball and score.

For the final 20 minutes of the game the match was dominated by the Bradford outfit as they demonstrated why they came top of the league. Their build up was patient as they forced more line drop-outs and repeat sets, which were very much the story of the day. They added a further two converted tries courtesy of Max Trueman and Rich Lumb to lead 34-14 as the full time whistle blew.

In the clubhouse afterwards, the West Bowling chairman reflected on three quality clashes between the two sides and looked forward to future meetings.

Beverley can look forward to 2017 with confidence. The next club event is the sports dinner which will incorporate the end of season awards at Lazatts at Cottingham on November 19th.