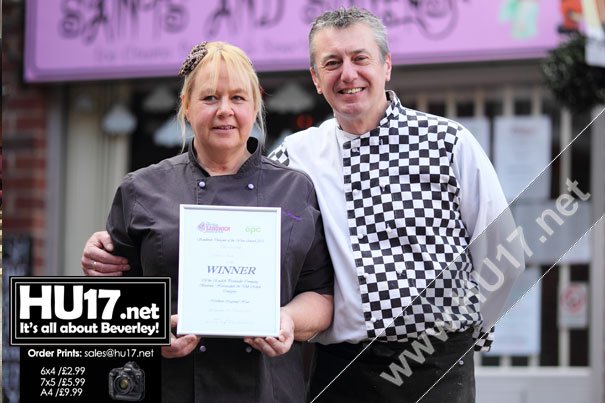 The battle to be crowned Sandwich Designer of the Year  2016 moves into its semi-final stage. Dawn Roe from Saints and Sinners in Beverley is one of 16 in Yorks & Humber Semi Final.

Last year Saint and Sinners won a prize and the owners of the local shop which can be found in Swabys Yard, Beverley are hoping for a repeat of that success.

Commenting on the news they have reached the semi-final Dawn from Saints and Sinners said;

“We are thrilled to be through to the semi finals once again. Darren and I have spent many, many hours deliberating over sandwich designs and are very happy to be through with 7 of them.”

“We hope to follow on from our success last year where we were crowned overall winners in our category.”

A sandwich is a complete meal and generally contains protein, carbohydrate and is part of your 5 a day. UK consumers spend in excess of £7,850,000,000 each year on pre-made sandwiches with the average being spent on a sandwich being £2.71 and with chicken being the popular filling.

Judges chose Dawn’s recipes from around 300 entries to the competition run by British Sandwich and Food to Go Association.

The region’s finest sandwich designers have been selected to go compete in the Yorks & Humber Semi Final.

Ian all there will be 16 entrants will be competing in 6 categories for their chance to proceed to the Grand Final, during British Sandwich Week in May.

“The Yorks & Humber Semi-Final is a true mirror on the industry with artisanal independents, catering companies and large scale manufacturers going head to head.”

“It’s fascinating to see how the styles differ so greatly and how the interpretation of a great British classic varies.”

For the first time, this year the Yorks & Humber heat will be held before a public audience and feature industry insight and discussion opportunities with leading people such as Greggs’ Head of Business Development, Andrew Hesketh.

A must attend event for food industry students and professionals alike it will take place on Monday, 14 March at Leeds University Union.