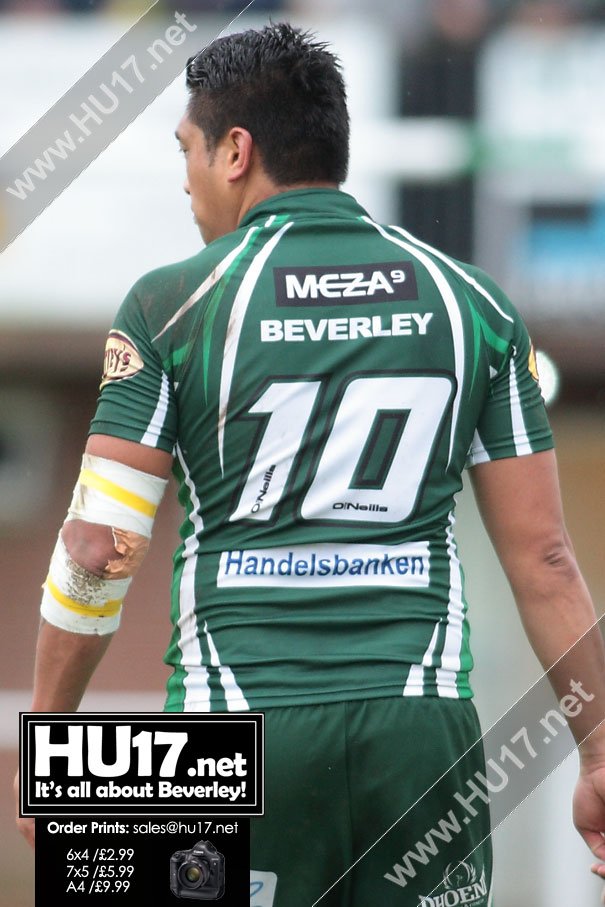 An entertaining afternoon with plenty of running rugby but not really much of it of high quality. Both sides were error-prone throughout but Beverley the more so and their sloppy handling and tackling cost them dear. After an even first half in which Beverley might easily have accrued a healthy lead they fell badly apart in the second and Alnwick romped away to a comfortable victory keeping them among the league’s front runners.

Although this was another heavy defeat for Beverley it was not all doom and gloom. For the first time this season there was pace and punch in the Beverley midfield with Junior Tupai adding the stability which has been missing and newcomer Ben Naylor at outside centre regularly making ground with some determined running. Had it not been for some pretty dreadful handling Beverley would almost certainly have been ahead at the break. Too many passes were simply going astray or being knocked on in good attacking situations.

Alnwick had their moments in the first half and only a superb covering tackle by full back Luke Hazell prevented a try when their fly half Calum Burn burst clean through from halfway. Just when it looked certain that the sides would reach halftime at 0-0 Beverley were penalised on their 22 and Burn kicked an easy penalty with the last action of the half. Had Beverley taken all their chances and turned round with points on the board the final outcome might well have turned out differently.

Beverley did almost respond direct from the restart. Craig Hancock rose high to catch Phil Duboulay’s restart kick and rampaged deep into Alnwick territory. Slick handling involving Tupai, Naylor, and Tom Shires took play to the visitors’ line but Alnwick somehow held out. Beverley were playing some good attacking rugby at this stage with Duboulay marshalling the backline well. Jake Marin was looking lively on the wing although he had unfortunately been kept on the bench until halftime. Beverley looked to be gathering momentum but it all went wrong when a poor kick upfield was gathered in their 22 by Alnwick who mounted a rapid counter attack. Play immediately went from one end to the other and ended with Alnwick number 8 Richard Ellis going over for a try which Burn converted.

Now two scores behind it was the beginning of the end for Beverley. They worked hard but their control seeped away. Alnwick stretched further ahead when Cuthbert fielded a clearance kick on halfway and ran through the entire Beverley defence without a hand being laid on him. In attack Beverley were still playing with plenty of enterprise and were perhaps the more creative side but carelessness was never far away. Scrum half Hugh Todd burst away from halfway for a third converted Alnwick try and within a few minutes substitute Olly Hamilton did exactly the same.

Naylor briefly raised Beverley’s hopes with a powerful sixty metre run out of defence and after a succession of attacking mauls on the Alnwick line David Worrall went over in the corner. Duboulay slotted the conversion with a fine kick from the touchline. Beverley gave it everything but could not find the finishing to make it count. A dazzling run reminiscent of past years by Worrall did very nearly bring them a second try but the ball went to ground when he was inches short.

Sadly Beverley could not sustain the effort and on top of their tackling and handling problems they began to look out on their feet in the hot conditions. All afternoon promising attacking positions had been wasted through possession once again being too easily lost. It has been a problem all season. In the final minutes Beverley simply caved in and further Alnwick tries came from centre Rory Mallaburn and Todd, both run in from long distance and both converted. It was indicative of Beverley’ day that over half of Alnwick’s six tries resulted directly or indirectly from interceptions or wayward Beverley passing.