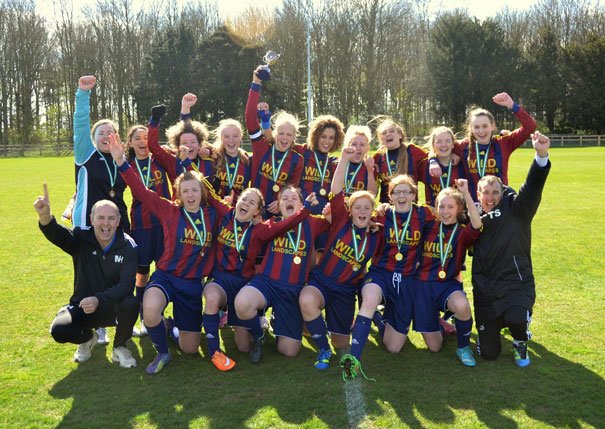 North Ferriby were winning the early exchanges , first into the tackle trying to gain the upper hand against the current league leaders .

The Yellows gradually got into the game with right winger Skyler McLeod causing problems everytime she took the ball down the wing creating chances in the Ferriby danger zone.

With Charlotte Holliday controlling the game from defence with some intelligent ball distribution the Yellows finally applied some pressure and took the lead after a fine strike from captain Emma Johnson after a pass from striker Morgan Nagee .

For the rest of the half saw chances created by both teams , but Mill Lane went in 1-0 leaders at half time. The second half saw the Yellows fast out of the blocks looking for that second vital goal, with Storr and McLeod creating havoc on their respective wings .

Chances were been created and only well organised defending kept the score at 1-0.

At the other end Ferriby were pressing and only good defending by Courtney Lees, Lucy Crockett, Jessica Pashby and Holliday kept them out ably assisted by goal keeper Lea Shalgosky .

With the central midfield of Neave Spriggs and Johnson starting to spread play from wing to wing finally the vital 2nd goal for the Yellows came , a surging run from Storr from half way found striker Marie Russell on the edge of the area , quickly getting the ball under control Russell released an inch perfect pass into the path of Tonya Storr who had continued her run to smash the ball home to make the score 2 nil to Mill Lane Yellows and put breathing space between the 2 teams.

Full credit to North Ferriby though who struck straight back with a superb 30yard free kick to set up a grandstand finish.

With the game on a knife edge the Yellows had to use all their experience to secure victory , as a Ferriby attack petered out Mill Lane Yellows quickly broke up field , quick passes out of defence through midfield released McLeod on another surging run and an inch perfect pass found Nagee to finish making  the game safe .

The final whistle blew a deserved 3 -1 victory and first trophy of the season to the Yellows . This was certainly not Mill Lane Yellows best performance of the season , but after a month without a competitive game they can be happy with the victory and look to an improved performance next Saturday as they look to secure their 7th successive league title.

Man of the matches went to Skyler McLeod for a brilliant performance on the right wing probing and causing problems throughout the 80minutes and midfielder Neave Spriggs who particularly in the second half dominated play in midfield stopping many Ferriby attacks.