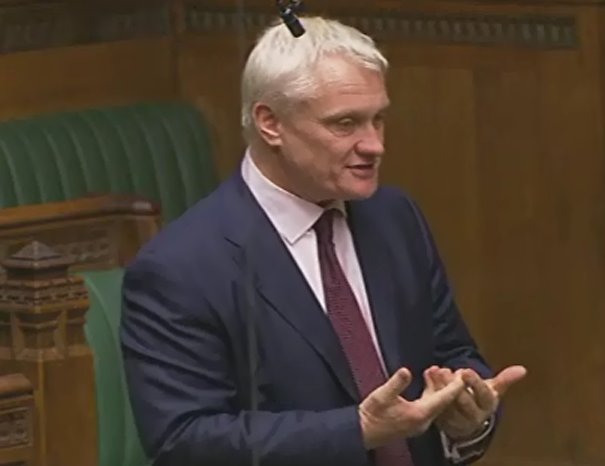 Graham Stuart MP has secured an important commitment from Education Ministers that they are exploring changing the system of allocating capital funding for school investment to local authorities in England from an annual to a three-yearly basis.

Graham raised the issue at Education Questions in Parliament today, asking whether Ministers agreed that a three-year funding allocation would make it easier to deliver the long-awaited investment at St Nicholas Primary School in Beverley, where plans have been submitted to consolidate the school on a single site.

Graham and Beverley Councillor David Elvidge have campaigned for the school’s plans to be realised and it is hoped that the necessary funding will be confirmed shortly. East Riding Council has said that it would be “of great benefit” if its funding allocation from central government could be delivered with a three year planning period so as to allow greater certainty when scheduling major projects like this.

“long term capital funding is highly desirable” and promised that both he and the Secretary of State “are looking very carefully at the arguments for moving to long term allocations of the capital budget.”

Graham previously wrote to Ministers in December to raise this issue. On 14 January Mr Laws replied to Graham:

“I understand that some aspects of the current system of capital maintenance allocations, such as those you raise, can present challenges for local authorities.”

“We are taking this feedback on board and actively exploring ways to enable local authorities and others to spend their capital maintenance funding more effectively, including the possibility of making indicative allocations over multiple years.”

“I am delighted ministers have promised to investigate this issue and hope that changes will be introduced shortly.”

Announcing schools capital funding for local authorities on a three year basis could make it much easier for East Riding Council to schedule the delivery of significant investment like that sought for St Nicholas Primary School in Beverley.”

“I’m very grateful to David Elvidge and our hard-working councillors in Minster Ward for raising this issue with me. It’s great that they are coming forward with constructive proposals to improve the system that could have an important effect not just in Beverley but across England.”

“Graham has been very supportive of the proposal to consolidate St Nicholas Primary School on one site since it was initiated.”

“Our school has come a long way in the last few years and is now heading in the right direction – we were recently awarded Good school status and hope to become Outstanding. One of the things that would really help would be to offer greater continuity of learning on one site, allowing younger children to learn alongside older pupils.”

“It’s great news that Graham is championing the issue of how capital funding is announced in Parliament as this could allow East Riding Council to plan key projects like ours with greater certainty. I hope this will encourage ministers to give serious consideration to changing the system and we’re grateful that Graham is standing up for Beverley schools.”

“I have worked with St Nicholas Primary School over the last few years and cannot think of a school community that is more deserving or in more need of an improved infrastructure.”

“The school and its main building celebrated its centenary last year and although quite an achievement the building is showing its age and is undoubtedly not fit for purpose for teaching and learning in the 21st Century.”

“I am therefore grateful to the staff and governing body who are supporting a rebuild and consolidation of the school onto one site, however whilst ERYC also supports this they are dogged by the lack of advance notice from central government only allowing for one year’s capital spends allocation at any one time.”

“Therefore I think its fantastic news that Graham Stuart MP is today challenging this in parliament, by demanding a three year allocation to allow realistic plans to be made for the education of our young people.”