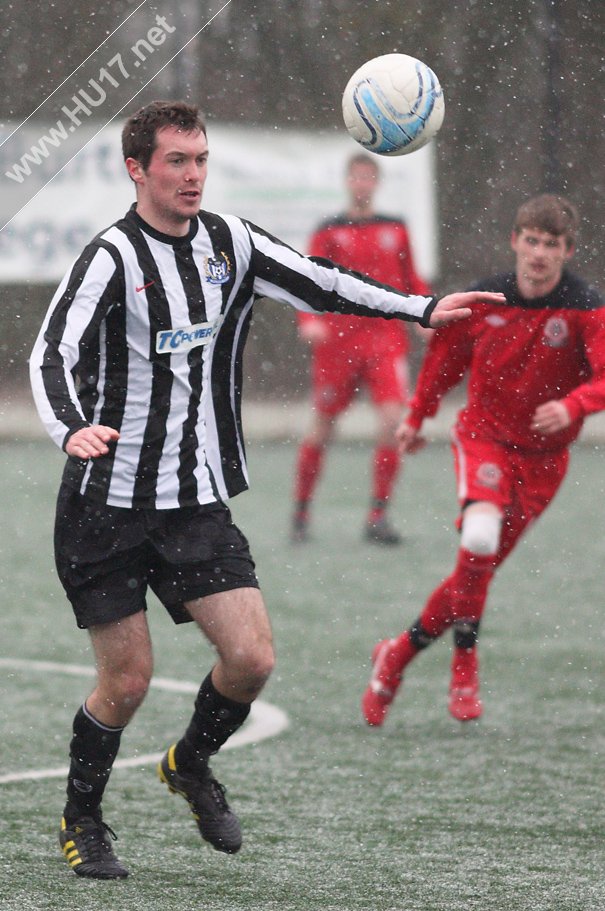 The game was one of very few in the country to survive the weather due to the availability of the 3G pitch at Bishop Burton College.

Westella started the game slowly and needed Rick Watson to make an important early save to keep the scores level. In a competitive game Bobby Stevenson worked hard to gain control of the the midfield.

As the half wore on Ella gained the ascendency and had the majority of possession but failed to turn this into goals. The nearest they came was in the 32nd minute when Jonathan Slater headed against the crossbar from Mike Thompson’s cross.

With the expected snow starting to fall the half time break was shortened.

Westella started the second half in positive fashion, with Matt Fyvie hitting the post within a minute of the restart. Again Westella had the majority of possession in the second half but the Yorkshire Main defence worked hard and were well led by skipper Daniel Jarvis. Ella went close again in the 54th minute. After an excellent passing move Craig Havercroft’s drive from the corner of the box was tipped over by Main keeper James Ward.

The game looked like it would be won by a single goal and as Westella continued to push for it Main carried a threat with pace on the counter attack. Defensive pair Alex Knaggs and Dave Clement dealt well with this threat and were two of Ella’s better performers on the day. In the final 10 minutes Westella missed two glorious chances to win the game. First Rob Petch fired over the bar with only Ward to beat and substitute Allan Laud shot straight at Ward when put clear in the box. With snow continuing to fall, the referee’s whistle brought the game to a close with the score at 0-0.

The game saw too many players have an off day at the same time but, despite some disappointment after the game, the point sees Ella leapfrog Dronfield Town and move up into second place in the league.