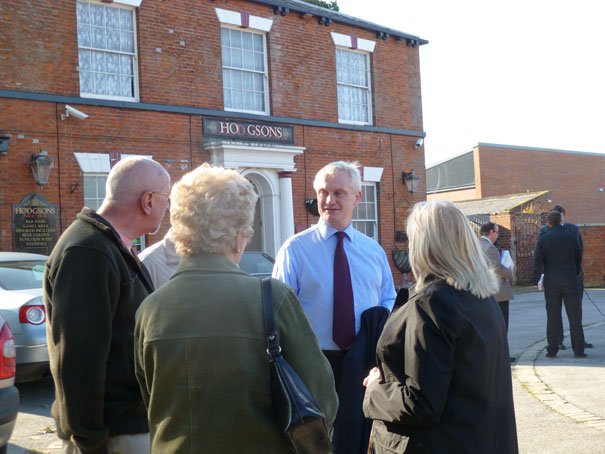 Last Friday Graham Stuart, MP for Beverley and Holderness, chaired a meeting organised by local residents of Lakeminster Park to hear their concerns about the threat of eviction from their holiday homes and the losses they had suffered as a result of alleged mis-selling by the developer.

Many residents of Lakeminster Park claim to have been told by the developer that they would be able to live in the homes on a full time basis despite the fact that the planning permission given explicitly said this was not allowed.

If these allegations are proven then the developer would be guilty of mis-selling and could be forced to pay compensation or refund residents for their investment.

Graham said, “Some of the residents of Lakeminster Park are elderly, some disabled and the developer should hang his head in shame if he misled them. I find his protestations of innocence unbelievable. He took some residents’ main homes in part-exchange and must have known their circumstances and known that what he was doing was wrong. I hope that the residents organise themselves into a group and consider taking joint legal action against the developer.

He continued, “I’m sure the procedures and protocols of the East Riding Council can be improved so that breaches of planning at holiday sites can be identified more quickly in future. However it’s not the Council that has caused this problem, it is the developer and it is upon him that residents should focus their attention and from whom they should demand justice.

“The developer should be clear that his flagrant breaches of planning are not going to be rewarded by full, retrospective planning permission for residential use. If such permission were given it would gift a multi-million pound gain to him on top of the large sums he has already obtained by questionable means. He should, however, seek to regularise the arrangements for existing residents by applying for a “lifetime” right to remain for them. He should stop prevaricating and do right by the residents whose whole quality of life is being undermined by the stress of this situation.”

Graham is determined to do everything he can to get justice for the residents. He has offered to channel any complaints about solicitors who failed to give proper advice to the Legal Services Ombudsman.

He is also encouraging residents who feel they have been mis-sold homes to contact the Trading Standards Service at 01482 396254 in order to lodge a complaint even if any such complaint has time expired.