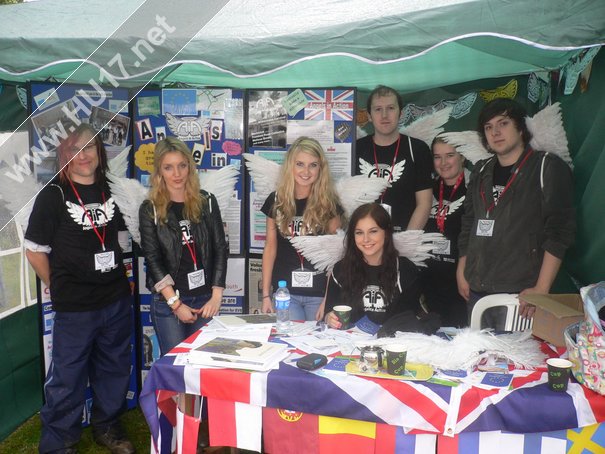 30 young people descended on Driffield today to help the organisers of the Driffield Show 2011.  The participants from a team of 40, all aged 16 to 30 took part in what was their second event of their summer with ‘Angels in Action. They entertained visitors queuing at various points on the showground with a European quiz and gave out a wealth of free gifts comprising, t-shirts, shopping bags, stationery items, maps and books.

They also amused the children on site with magic tricks and sneaky stunts they were taught during their training programme. They are attending other major festivals this year including the Hornsea Carnival, Withernsea Carnival, Goole Beach Day and have already successfully delivered a weekend of volunteering at the Beverley Folk Festival.

This has all been made possible thanks to the support of the British Council and the Youth in Action Programme in what is the European Commission’s European Year of Volunteering 2011.

Sue Dudill, Coach and Youth in Action Promoter for CSV East Riding, explained, ‘The project has been more popular than we ever dreamt it would be in terms of the interest from young people who want to be part of this team. We are fulfilling a great need in the community in these challenging times and I am incredibly proud of them all.’

Participant and Team Leader, Phil Thompson added, ‘As a qualified youth worker this has been a truly innovative and engaging project to be involved in and I have no doubt it will help me with employability in the future. That aside, it’s been a pleasure to be part of it and so rewarding.’

This project has been funded with support from the European Commission and British Council.

This communication reflects the views only of the author, and the European Commission and British Council cannot be held responsible for any use which may be made of the information contained therein.