A solid BarceHullona team put in what is arguably their best performance to date as they hit reigning chaps Waterside for 4. The return of Nicky Moy and Mike Dixon opened up new tactical opportunties for the Barca boys and they took full advantage with some crisp passing a quality finishing. Quality moment of the night came when Lee Marshall lived up to his nickname of Legsy, by falling over himself whilst trying to play a corner, only to see the ball move all of 2 inches.

In what some may label a stroke of genius, this played too the advantage of BarceHullona who quickly responded to Lee’s deft touch by launching into what appeared to be an innovate dead ball move. Waterside did manage an equaliser through Samii Tarhuni (who’s shooting must have improved from his warm up show), but the majority of the team appeared to have their minds focused on the Walkington Barrel Cup final this Wed and not on the game in hand – Good Luck Barrel.

In a tight affair between the established Weighton Utd and the newcomers Inter Buckle, the game ended all square. It could have been a different story had all Inter players known the rules prior to their defender wandering into the penalty area to give away a spot kick. It was all square by half time though after a Kershaw pile driver from a long way out gave Inter a share of the points in their debut game. The Buckle boys, led by for Shanghi Champion Jack Van Wren, look to have a pretty decent squad and should fair well in the top division.

The final game of the night saw PSV Hangover play out a goal less draw with the Trogs. The game was really a story of two top defenders, with both teams’ centre backs winning balls on the deck and in the air. The play was pretty even throughout with both teams creating a few half chances, but nothing to really trouble the keepers. Midfield men Paul Wilson (PSV) and Diego (Trogs) controlled the play for the respective teams but couldn’t quite find the killer pass or finish. The game ended a little niggley with cheap free kicks and fouls, and both teams finished with 5 men with first PSV losing a man to injury then Trogs being reduced to 5 after a nasty high boot contact which resulted in a 2 min sin bin. Next week PSV play BarceHullona. Trogs are due a week off but may be called in to play their outstanding game against new boys Inter Buckle.

The game between Depotivo v Borussia Teeth saw what must be the best goal ever scored at Soccer Sixes. Form man Harry Peach put a megs on the first player, skipped the second then smashed an absolute rocket into the top corner from close to the half way line, leaving the borrusia keeper rooted like a 200year old red wood. Deportivo continued to dictate play with some great pass and move football (finally!!!) but couldn’t add to their single goal. Borussia did create a few chances, but notheing that really bothered keeper Callum Eade. The win takes Depo top of the table and Peach also stays top of the scoring charts – what a finish!

Not Very Athletic’s good form continued as they ran out 2 v 0 winners over a frustrated Angel. As the game kicked off it was all Angel, as they kept possession like Barcelona for over a minute, only for Darren ‘Rage’ Page to fail to convert a glorious opportunity. After that though, Athletic clawed their way back into the game and scored a good goal through Habblethwaite. Angel continued to knock on the door but often lost the ball and NVA played a solid counter attacking game . They confirmed their victory with a late goal from Kennington, taking him joint top in the scoring charts. A good day for all Not Very Athletic fans, although a player I spoke to after he game seemed worried that they may gain promotion and get hammered every week in the top division. We will have to see if their good form “wanes” later in the season.

In the fianl game, Beverley Knights miserly defense continued to frustrate the opposition. Led by Captain / Manager Andy (‘The Gut’ – brother Sanders) Sanders, the Knights have only conceed 2 goals in their last 7 matches – a stat that would have been the other way around last season! It’s jusy a shame they can’t find a goalscorer!!! MW Sunday continue to fluctuate. For a new team their form is pretty good and they will be picking up more points once they settle into the league. 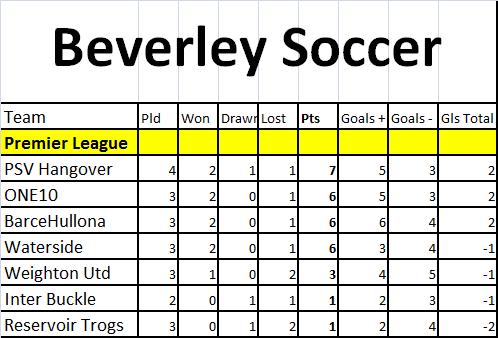