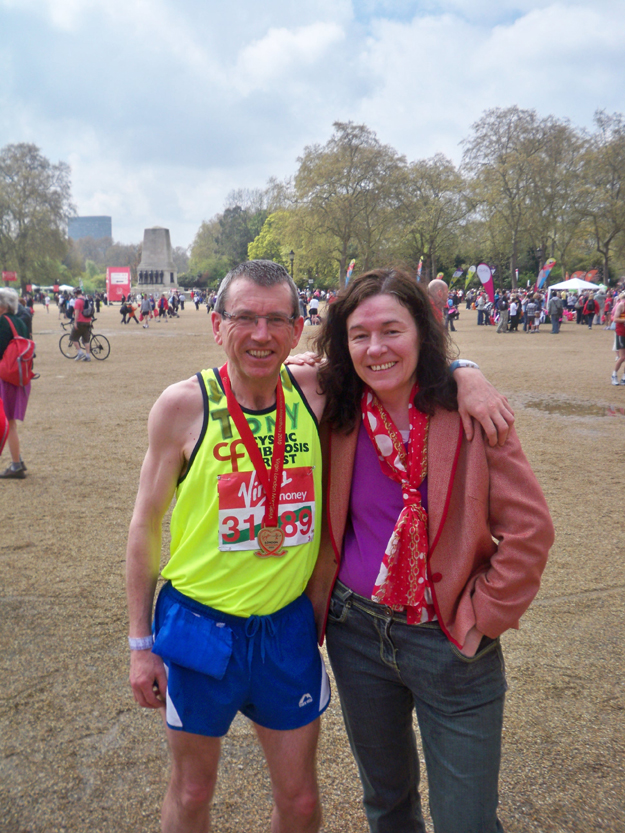 Athletes from Beverley Athletic Club are celebrating their achievements in the 2010 Virgin London Marathon:

There were new personal bests for Rob Snaith, Steve Jackson, Ian Husband, Andrew Brant and Steve Hadley; Rob Snaith finished in the top 300; Tony Hunter was in the top 10 for his age category; Claire Burcham, Paul Burnley, Jayne Dale and Tim Simpson all completed their first marathon; and several Beverley runners recorded times that are considered good for their age and will gain automatic entry to the race next year.

Rob Snaith, competing in only his second marathon, was the fastest Beverley runner over the distance, finishing in 2 hours 44 minutes and 38 seconds.  He admitted to finding the last few miles tough but the tremendous support from the crowd helped him to the finish.

Tony Hunter finished 10th in his age category (55 – 59) in 3.02.15 and just missed breaking the elusive 3-hour barrier.  Tony qualified for London as a good for age competitor and also raised funds for cystic fibrosis.

Steve Jackson worked hard to break the 3-hour barrier for the first time, finishing in 2.57.04.  A delighted Steve now qualifies automatically for next year as good for his age.

The first Beverley lady to finish was Julie Donald, a regular competitor in the London Marathon.  She put in another strong performance, crossing the finishing line in 3.33.

Running in her first marathon, Jayne Dale thoroughly enjoyed the experience.  She finished in a very respectable 4.07 but has the potential to run faster.  She is a capable and tough athlete and if she has been bitten by the marathon bug she will be aiming to run sub-4 hours next time.

After qualifying for a good for age place, Pam Atkins found it difficult to run at her own pace due to the crowds of runners around her.  Despite the frustration she enjoyed the day and was fit enough to run in the Champagne League two days after the marathon.

Wearing a Meningitis Research vest rather than his club colours, Chris Dunn has run the London Marathon 10 times in memory of his dad Brian who died of the disease eleven years ago.  He estimates that he will have raised over £400 for the charity this year.

36,522 people completed the marathon which was won by Ethiopian Tsegaye Kebede in 2.05.19.  The winner of the elite women’s race was Liliya Shobukhova from Russia in 2.22.00.