Holly Bentham has capped off what has been an impressive 2017 by winning bronze at the British Judo National Championships.

Bentham, a student at Longcroft School, latest medal means she has also secured a place in the Great Britain squad.

Sponsored by the Sterling Partnership, Flemingate, Beverley and supported by East Riding of Yorkshire Council, the tone for the day was set in a ferocious contest against Georgia Halloumas of London’s Metro club. 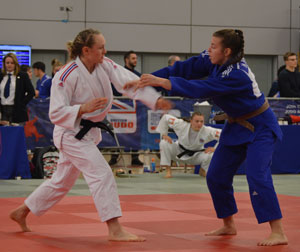 This was a fight that lasted over 9 minutes, before Bentham summonsing the last of her energy reserves powerfully threw Halloumas for Ippon thereby winning the contest.

More contests followed before Bentham finally clinched her medal by tightly holding down her entangled last opponent who consequently submitted by tapping out.

The next day saw the East Yorkshire Judo Academy fighter step into the Senior Championships for the first time having been invited to attend due to her obtaining a top 16 ranking.

A valiant effort in both contests saw Bentham eliminated however it will prove to be a useful grounding in her quest for future success.

Bentham will now be invited to attend the British Judo Centre of Excellence at the University of Wolverhampton, Walsall.

There she will be coached by the best Judo coaches in the UK while getting to train alongside other members of the national junior and senior squad in the 70Kg weight class, including Olympic bronze medalist Sally Conway.

Her latest medal comes just months after the talented youngster returned home from Junior Commonwealth Games where she won gold while representing England.