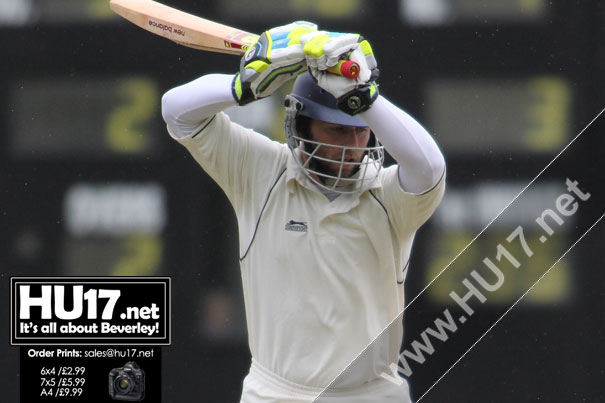 Heworth’s relegation was confirmed as they lost by five wickets to Beverley Town Cricket Club.

The hosts’ reduced their opponents to 11-2 in reply before a partnership of 186 between Olly Grantham (122no) and Anthony Spence (81) all but sealed their fate.

Sessay maintained their late surge for a promotion place with a fourth straight victory in the Hunters York & District Senior League. Leaders Clifton Alliance arrived having won their last five but despite all their middle order making starts four wickets from Tim Hall (4-51) and two from Stuart Pierse, who conceded just 16 runs from 13 overs, the visitors were only able to reach 152-8. Simon Mason’s fourth half-century of the campaign set the hosts on their way and when he was fourth out for 55 with the total on 116, Hall (17no) and Jacob Spencer (24no) saw them over the line.

Second placed Easingwold were unable to take advantage of the leaders slip finishing on the wrong end of a draw at home to Studley Royal. The visitors looked to be in trouble as Paul Skilbeck (4-46) sent back the first four batsmen, but a century from Ian Dixon (104) off just 90 balls brought his side back into the contest before James Postill (3-37) closed out the innings on 207. James Clarkson (4-25) matched Skilbeck’s early effort, his haul including hosts’ opener Stephen Piercy for 31 but they recovered from 56-4 to reach 177-7 thanks to 44 from James Postill and despite 3-62 from Joshua Chandler.

Driffield Town’s victory at Bolton Percy meant the hosts’ drop into the relegation places with just three rounds of matches remaining. Grant Halder (71) was the visitors’ top scorer and 30 each from Jordan Caley and Nicky Johnson helped their side to a total of 216-8. Tom Atkinson replied with 69 and Jamie Rigby 46 as the hosts were all out 39 runs short of their target Johnny Anderson finishing with 6-56.

Matthew Wilkinson (7-21) produced the best bowling performance of the day as Hull Zingari dismissed local rivals Goole Town for 72 which a included an unbeaten 27 from Neil Foster. The hosts lost three wickets in reply but 36 from Jack Storey was enough to ensure his side climbed out of the bottom two.

York’s six match unbeaten run ended in spectacular fashion as they were bowled out for just 98 at Pickering, Michael Brown (6-54) and Dan Ward (3-27) doing most of the damage. The hosts didn’t have everything their own way however as they were made to work hard taking more than 40 overs to reach their target with eight wickets down Ted Patmore (4-25) and Nick Kay (3-24) almost pulling off what would have been a remarkable victory.