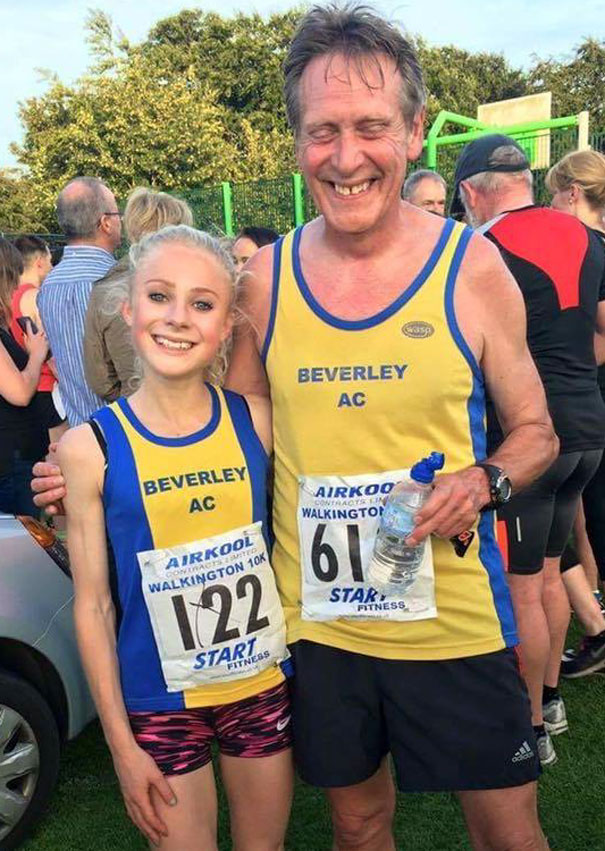 Having also won the Withernsea 5 mile race two weekends ago, Briggs posted a time at Walkington of 39:14, a personal best time well over a minute faster than her time over the same course last year, and over three minutes faster than the next placed female runner. Second and third fastest women were Deborah Church (Driffield Striders) and Sue Haslam (Scarborough AC), recording times of 42:23 and 43:14. Beverley’s 2nd and 3rd female runners were Miranda Hunt (49:13), and Linda Wright (49:30).

In the men’s race, the fastest runner was Steve Bateson (East Hull Harriers), who completed the course in 33:20. Behind him, second and third places were taken by Jonathan Carter (Tipton Harriers) in 33:37, and Alec Gibson (East Hull Harriers) in 34:00. Beverley’s first runner to cross the line in 38:55 was Edward Lisney. He was followed Stephen Peacock in 39:28 and Mark Dalton in 40:27.

The race was organised by Beverley Athletic Club, and had a field of 508 runners, including 32 representing the club. Several of Beverley’s junior runners took part in the 10k and achieved good times in this challenging event. This rural course, which includes several hills, heads out into the countryside from Walkington, returning via Little Weighton, before finishing with a lap of Walkington playing field. Conditions were good and the race was as well supported as usual with plenty of spectators in both Walkington and Little Weighton.

Before the 10k, 133 mainly younger runners took part in a tough mixed-terrain 1.7 mile race. They included 13 Beverley AC junior members. The club’s Laura Duncan was second girl home in 11:07, and Aidan Glover and Robert Smith both finished in the top ten overall. Winner of the boys’ race was Kian Wiles, while Amy Parnell (Goole Youth AC) was fastest girl.

The next race organised by Beverley Athletic Club is the third College Canter, sponsored by Pittaway Painting and Decorating Contractors, which will be held at Bishop Burton College on Sunday September 25. The event will include off-road races of around 3 and 7 miles. Previous College Canters have been very successful and this year’s event will continue to provide an interesting race for runners of all levels. Entries are now open and full details are available from the Club website.