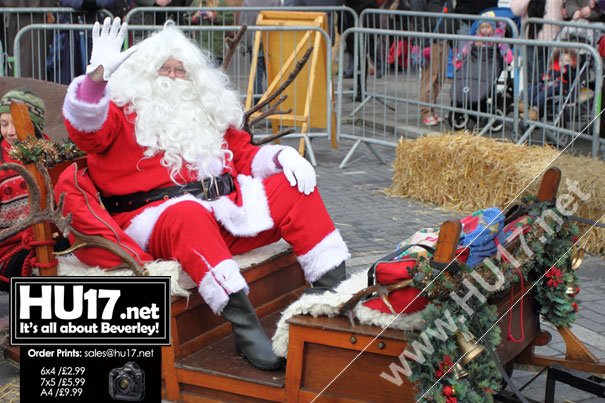 The 20th Beverley Festival of Christmas attracted around 55,000 visitors and generated an estimated £770,000 for the local economy, according to a report by Beverley-based researchers, 1824 Research & Consultancy Limited.

Commissioned by East Riding of Yorkshire Council and EY Events, the report is the first time that feedback has been sought from a variety of stakeholders, including local businesses, people who attended the festival.

Having analysed the findings of the report, it became very clear that visitors and stall holders alike were keen to incorporate more of Beverley itself into the day. Therefore, organisers have made some positive changes to extend the overall footprint of the festival, from North Bar to Flemingate, allowing these areas to become a more integral part of the Beverley Festival of Christmas.

However not all these proposals have proved to be popular with the East Yorkshire Classic Car Club saying they have been forced to move from the location they have been at since the very start of the event in a take it or leave it deal from the council.

This research will allow organisers to further develop the event for the future as well as provide useful data to support planning for other major events, such as the Tour de Yorkshire.

“This research is very important as it helps the council, through EY Events, to plan and deliver events that provide vital opportunities to boost the local economy.”

The 2015 Beverley Festival of Christmas was widely regarded as a success by visitors and celebrated by those involved.

Research shows that almost two thirds of visitors who attended the event came from outside the East Riding and more than two fifths travelled from Europe or other parts of the UK, demonstrating the attraction of the event and highlighting the opportunity to increase future attendance and income.

A staggering 95 per cent of businesses rated the festival as either excellent or good overall and this increased to 96 per cent for visitors, with atmosphere, variety of stalls and food and drink options also rated highly.

“The Beverley Festival of Christmas is the jewel in the calendar and this research highlights the strengths of the event, it is especially pleasing that 98 per cent of visitors would recommend the festival to family and friends.

“It also notes areas of improvement, such as raising more awareness of the event and improving parking, toilets and signage. All things that we shall now look at.

“There was also strong support for extending the festival across more days and nights, which is something the council will consider.”

“Rarely do we evaluate events that are as celebratory as the Beverley Festival of Christmas. While we retain our independence it is wonderful to consult on a successful event and support its development moving forward.”