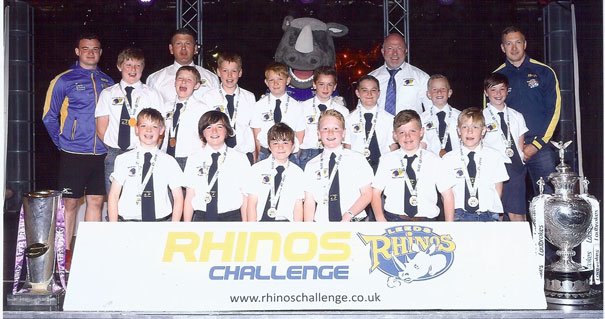 A fantastic effort from the Braves results in 7th place Beverley Braves U11s attended the Rhino’s Challenge festival for the first time this past weekend and finished an outstanding joint 7th out of the 29 teams competing in their age group.

The Braves festival opener was against Dewsbury Moor who started strongly but the Braves soon got the upper hand and ran out convincing winners 3 – 0 with tries from Sam Bayes, Sam Shrimpton and William Wilson.

The second match saw the Braves take on local rivals Hull Wyke. In a tight game where the defensive strength of both teams stood out the Braves managed to score a last minute try to edge the game 3 -2. The Braves try scorers were Sam Bayes and William Wilson with a brace.

With confidence on a high the Braves faced Pilkington Rec’s in their third match and started strongly with a hat trick of tries from Sam Bayes. The Braves switch off for a few minutes which was enough to let Pilkington back into the game. A forth try for Sam Bayes plus tries for Jacob Parkinson and Oscar Thomas saw the Braves finally run out convincing winners 6 – 2.

With the Braves vying for top spot in league 3 they faced Hunslet Warriors in their penultimate league match. In another strong defensive performance with Reubyn Mortimer, Tom Murphy and Roberto Seminara all putting in crunching tackles it was the pace of Sam Shrimpton with a hat trick and the power of William Wilson another try which saw them win 4 – 1.

With four wins from four matches the Braves faced joint league leaders Ryland Sharks who had yet to concede a try. In a bruising encounter the Braves struggled with the size and power of the Sharks who ultimately won the match 7 – 0.
With many of the Braves exhausted and nursing injuries sustained from the physical encounter they left the pitch dejected despite qualifying for the cup competition as one of the top 8 teams along with 3 other Hull and District teams.

After such a bruising encounter with Ryland Sharks it was incredibly disheartening for the Braves to be drawn against the same team in the quarter final match on Sunday. Nervously the Braves took the field against Ryland Sharks with the bruises still fresh from the day before.

In what proved to be an outstanding game of rugby league the Sharks went straight on the offensive. The Braves defence held strong despite the significant size advantage the Sharks had. Crunching tackles from Sam Bayes, Jude Kilgannon, Jacob Parkinson, Matty Smith and Louix Gorman kept the Sharks out and the significant crowd were loving it.

The Braves failed to break through the Sharks defence on their opening drives despite strong runs from William Wilson, Daniel Smith and George Precious. Finally, the Sharks found a way round the Braves defence despite strong tackles from George Youngs and Oscar Thomas.

Unlike their league match the day before this only served to inspire the Braves who responded strongly just coming up short of equalising. Again the Sharks exposed the Braves lack of width despite a brave attempt from Sam Shrimpton. In a change of tactics Sam Bayes kicked long and the pace of Sam Shrimpton proved too much for the Sharks and the Braves were the first team to cross the Sharks try line in the tournament.

The Braves continued to pressure the Sharks with strong runs from Jude Kilgannon and Tom Murphy but the Sharks once again crossed the Braves line in the corner. The Braves hit back again with a training park move which saw the ball spun wide by George Youngs and Jacob Parkinson and then an offload from Louix Gorman to see Sam Bayes walk in.

The Sharks were rattled but the Braves, despite giving it 100% couldn’t cross the Sharks line again and ultimately went down 6 – 2. This had been an outstanding performance by the Braves who could easily have capitulated given the physical encounter they had experienced the day before.
All credit to the team for outstanding rugby they played which left parents and coaches alike emotionally drained.

In their final match of the tournament the Braves failed to reach the highs of their quarter final despite an early try from William Wilson and some great defence by Reubyn Mortimer and Roberto Seminara.
A 7th place finish on their first visit to this excellent rugby festival was a fantastic achievement by the Braves who did themselves, their club and their parents proud.

The eventual winners of the U11s tournament were Skirlaugh Bulls of the Hull and District League who were cheered to victory by all of the other Hull and District Teams. It was fantastic to see such sportsmanship from players, coaches and parents who compete against each other on a weekly basis. A lesson to be learned by other sports here.

Beverley Braves would like to thank our sponsor Evans Halshaw, Vauxhall Beverley whose support was greatly appreciated as it has enabled this team to represent Beverley in this distinguished tournament, develop their rugby skill and broaden their character on and off the field.

The club would also like to thank the staff and customers on B&M Willerby and Morrisons Beverley for supporting their bag packs which also contributed towards attending and representing Beverley at this national Rugby League event.