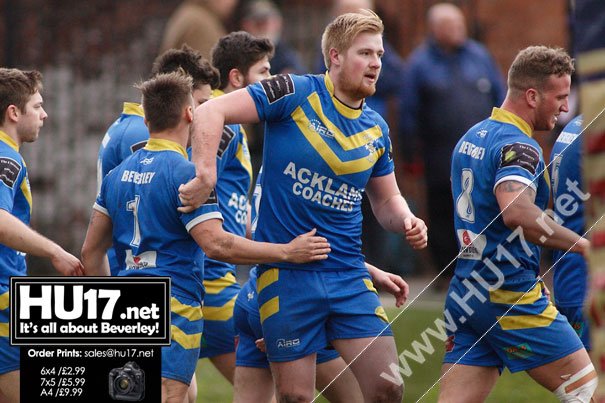 This performance was a credit to the blue and golds attitude in the face of adversity. The bus did not arrive at the ground until 2pm for a 2.30pm kick off.

A perceived short cut was taken to the ground which turned out to be not so short, mainly due to the amount of traffic lights which needed to be negotiated on the way. When they arrived they were met with an extremely boggy pitch which sloped away on one side.

It seemed as so often is the case with these trips up in the Pennines in West Yorkshire, that the quirky pitch would favour the home side. However, the visitors were having none of it and got quietly on with the job and booked their place in the 40/20 cup final at Heworth, York on Friday May 27th. Their opponents will be York Acorn ‘A’ who defeated Shaw Cross Sharks ‘A’ in the other semi-final.

The visitors who lost Billy Riby and Josh Pooley with injuries in the early minutes of the match were on the scoreboard inside just two minutes. Lewis Poskitt’s kick on the last tackle was fumbled by a home defender and Craig Morfitt grabbed the ball and sent Josh Poskitt over in the corner. The extras could not be added.

The home side replied quickly after a couple of sets down in the Beverley 20 saw a long ball find their wingman in acres of space for him to touch down. The extras were not added. Beverley were undeterred and warmed to the task in the difficult conditions. In an impressive first outing for the club, centre Craig Morfitt created space for his winger with a pass to Josh Poskitt. Poskitt evaded at least three defenders on a mazy run to touch down in the corner. He converted his own try this time.

The two sides continued to slug it out in the mud until the visitors increased their lead in the 26th minute. Some good field position and repeat sets ended with Tom Moore darting over from dummy half for Poskitt to again convert. More points followed when Jack Howdle crabbed across field and got a pass away to Tom Shires. Shire headed for the corner but just when it seemed the chasing cover would drag him into touch stepped inside to score an unconverted try. With 20-4 interval, lead coached Pat Howdle and Scott Taylor knew the same game management should be enough to send them through to the final.

As conditions worsened in the second half, and players became difficult to recognize the home side enjoyed a little more possession and territory. However, as they mounted an attack in the Beverley half, a wild pass saw Chris Johnson intercept. It seemed the prop forward would go all the way but was eventually chased down in the mud. Midway through the half saw another chance go begging.

Jack Howdle broke free and sent Alex Calvert clear in a rampaging run. As Calvert headed for the corner, his pass to his support went to ground. Five minutes later, Calvert made no mistake when again latching on to another Jack Howdle pass to pull clear and score. The conversion was missed, but the game was safe at 24-4 with 15 minutes remaining.

Aided by a succession of penalties, the home side worked their way up-field. This led to a try from a kick on the last and was consolation in the closing minutes of the match. The man of the match was deservedly awarded to Tom Moore, who is now really making the number nine shirt his own. Moore is looking really sharp and lively around the dummy half position.

This Saturday the blue and gold commence their league season in the Yorkshire Premier League. They have a tough opener away to last year’s champions Sharlston Rovers. The West Riding outfit were unsuccessful in their bid to join the National Conference last year as they did not meet the criteria.

The bus will depart from Hodgsons at 12.15pm. Supporters are welcomed on the bus as the club is hoping for a good following. There is just a small charge of £5.

In a busy week for the club, they will also play a Royal Engineers Army side on Wedneday April 13th to be played at Dene Park Dunswell. The Army are bringing two sides, and Beverley will also be putting out two sides, so there will be two games with the first game for the ‘A team kicking off at 6. 30pm.

Beverley have this year entered an ‘A’ team in the Yorkshire entry league this year, and new and old players are encouraged to come along to training at the Leisure Centre at 6.30pm on Thursdays.