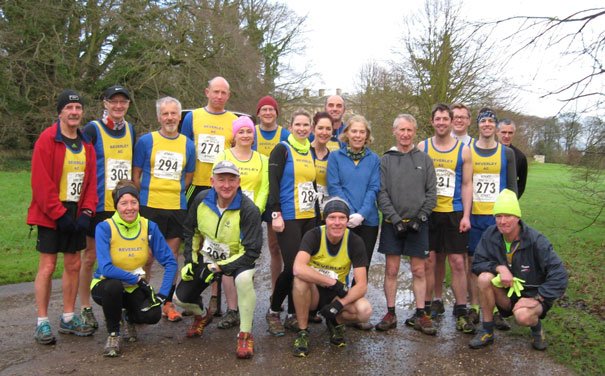 Twenty two club members were amongst the 157 runners from 8 local running clubs who completed the fourth event in this year’s East Yorkshire Cross Country League, held in the grounds of Sledmere House and organised by Driffield Striders.

This is the longest race in the series, at just over seven miles. The route is two laps of the fields and woods adjacent to the house. Although the course lacks the steep climbs of most of the other races, there is a long slow drag up to the highest part of the course and a steep, winding descent through fields before a final, draining climb to the finish line. The course was muddy and slow in places, but unlike most of the other races in the series also includes some dry tracks allowing runners to get up some speed.

The men’s team were third in this race, finishing behind City of Hull AC and Driffield Striders, but have performed well enough in earlier races in the league to remain in second place overall.

In the women’s race first finisher was Carla Stansfield (City of Hull AC), who was 13th overall in 47:13.

Beverley’s women’s team finished seventh overall but are 6th in the league after 4 races. The team was led in by Emma Greensmith in 55:05, and she was followed by Lynne Stabler (70:00) and Christine Hemingway (74:28)

The fifth race in the six-race series will be at Welton, on Sunday 7th February, with the finale at Sewerby in March.

On the same day, many of the club’s junior members, and some of their senior team mates, took the trip to the Humberside Cross Country Championships held at Quibell Park, Scunthorpe.

These races are used to select teams to represent the county at the national cross country team championships at Birmingham in March. In all, 13 Beverley AC juniors were chosen after some great individual and team performances.

Becky Briggs won her Under 17 Women’s race, and is now county champion for her age group. Along with team mates Laura Duncan and Eleanor Boyd, Beverley made up the first team for this age group.

Taking second team in the Under 15 Girl’s race were Isabelle Horrocks, Chloe Broadbent and Jordan Peacock. Beverley fielded the second place team in the Under 17 Men’s race (Oliver Douglas, Jacob Chasteney and Greg Jackson) and were first team in the Under 15 Boy’s (Taylor Arnott, Jonathan Dennison and Eira Lowery) and under 13 Boy’s (Aidan Glover, Robert Smith and Guy Harbidge) events too. The Under 11 Boys were the third team, consisting of Joel Harbidge, Jack Marsay and Ryan Broadbent.