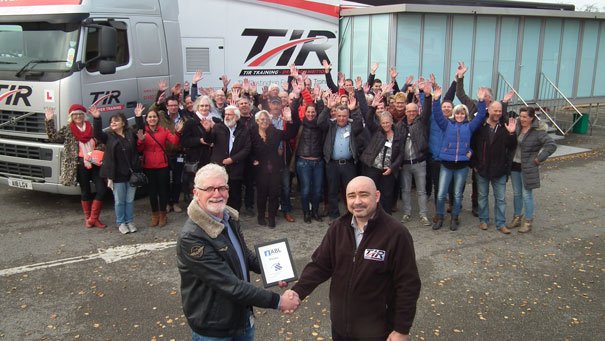 TIR Training from Beverley  has been boosting Anglo-Dutch relations by sharing best practice with their counterparts from Holland.

Members of a driver training society based in northern Holland spent a day at TIR Training learning how LGV drivers are taught in the UK.

During their visit they got the chance to practice their safe and fuel efficient driving skills on the mobile simulator and were given an insight into the steps it takes to become a truck driver.

Shah Wright, Director of Operations at TIR Training, said: “The day was a real success and everyone enjoyed themselves.

“It allowed us to showcase how we go about our business and how professional we are.

“They were keen to learn about our operation but we also learned things from them. By law, their trucks have to have dual controls and they were surprised that was not the case here.

“They have invited us over there next year and it would be good see how they operate. They were brilliant guests – really friendly, polite, knowledgeable and receptive to what we had to say.”
The Dutch drivers were all members of the ABL driver trainer society based in the province of Friesland in north-west Holland.

The society has 150 members and more 50 people took part in the trip to TIR Training.

“There are lots of small driving schools but then we found TIR and Shah said OK, which was wonderful.”
Nico said there are a lot of similarities between Holland and UK driver training. One of the major differences is, in Holland the maximum height of trucks is four metres to take account of the country’s roads and bridges, he said.

He added: “I think it’s good for our members to see how you deliver driver training in the UK. It would be nice if TIR could visit Holland so we could show you how we work.”

Society member Yda De Boer, who has been training drivers for 30 years, was impressed by TIR’s simulators.

She said: “In Holland they are anti-simulator but I have a simulator myself and I know their potential. I was surprised and happy to see TIR has three simulators as well. It’s a good way of learning.”