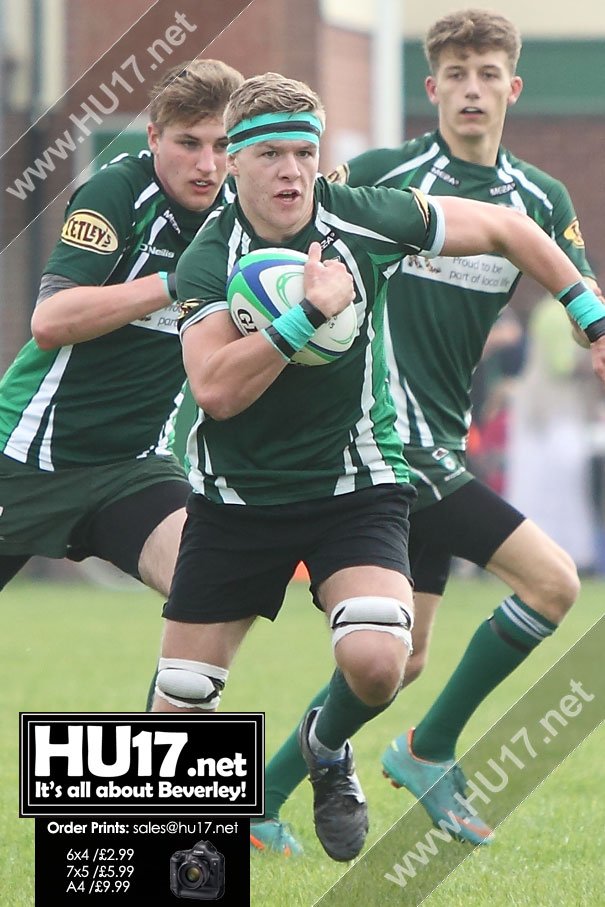 Beverley RUFC Colts travelled to York in what was always going to be a tough encounter for the Colts.

Captain Luke Hazell won the toss and elected to play up the slope in the first half while York chose to kick off.

It wasn’t the best of starts for Beverley as they failed to field the first kick putting themselves under immediate pressure.

The strong York pack proceeded to push Beverley right back to their own try line and it was only thanks to some big hits from Rob Cunningham and Will Cook that York were kept out.

Beverley finally obtained possession and soon found themselves up field thanks to a great break from Chris Chapman on the wing.

This took Beverley to York’s 22m line where after a couple of rucks some quick thinking from Joey Franklin saw him go over untouched to open the scoring and Jockey Holmes add the conversion.

Beverley again failed to field the kick off properly coughing the ball up to York. Although when in possession the York side looked a serious threat the well organised Beverley defence were able to thwart their efforts and turn over ball which again saw Chris Chapman burst up the line.

A superb pass putting Harrison Mayou in for Beverleys’ second try with the second conversion saw Beverley go 14 to nil up.

Beverley were now in their stride and saw the ball moving a bit more freely with the forwards making big carries.

There was also room out wide and Beverley started to exploit this. Another great run from Jake Marin deep in the Beverley half again took Beverley to the York 22m.

Good ball retention and hard running by backs and forwards alike allowed Mayou to snatch his second try . Beverley however missed the chance to increase their lead as they missed the conversion.

York pressured the Beverley line yet again, but after the ball was held up over the line and York were awarded a penalty, which they chose to kick registering their first points of the match.

This could have been much worse for Beverley who appeared relieved to have only conceded 3 points after another period of sustained pressure.

Just before the break that pressure finally told and York crossed the Beverley line . The score went unconverted bringing an entertaining first half to an end.

The second half started with a serious of errors from both sides.
Followed by what appeared to be a constant flow of York awards for both penalty infringements and technical decisions. However good Beverley defence again kept them out for this period.

A great turnover by Holmes and a quick pass out finally saw Beverley get out of their own half and quickly go on the attack.

Niall Carruthers coming off the bench made an immediate impact at nine, keeping the York team guessing. Indecision by the York side and strong running from Chris Chapman saw him cross for the bonus point try for Beverley. The conversion followed sailing through the uprights in increase their lead.

Beverley never looked back from there, enjoying the majority of the territory and possession for the remainder of the game.

Beverley soon found themselves in the York 22 where Franklin, now at flyhalf, put Hazell into a gap.

Hazell then drew the full back making Sam Fussey the grateful recipient of a run in try. Franklin made no mistake with kick adding the extras for the visitors.

This was another good away win for Beverley against decent opposition. Next Sunday sees Beverley away again at Scunthorpe.