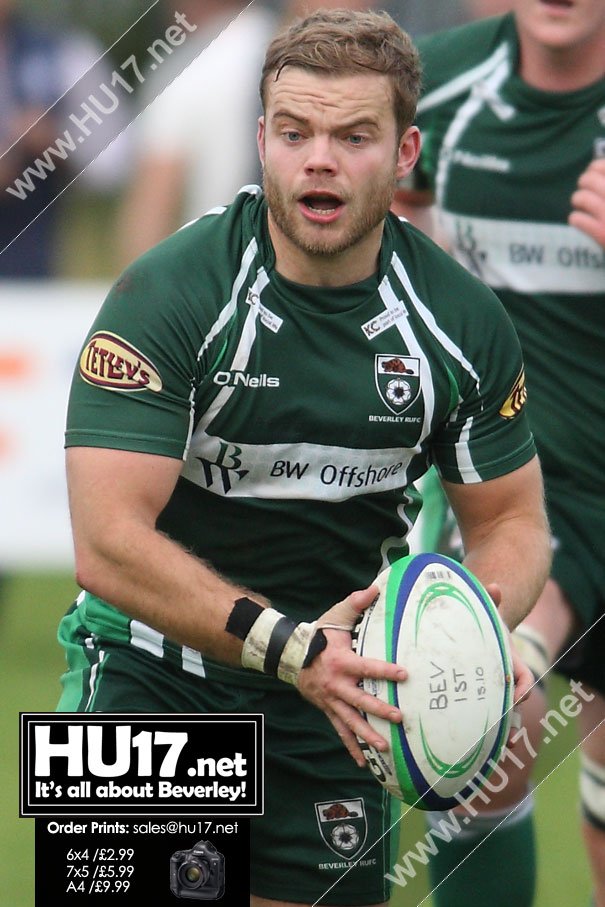 At last. A first win for Beverley and a fine one at that with a bonus point to boot. There was little here to suggest that they had gone into this game winless and without a single point from their previous seven matches.

Beverley played by far their best rugby of the season and the margin of victory was no less than they deserved. Westoe played their part in what was an open and enjoyable game and they never stopped running the ball. Westoe had a good first quarter when they led 7-6 but as Beverley’s momentum steadily gathered pace so Westoe’s gradually faded.

It was six minutes before Beverley could get out of their own half and when they did, thanks to a powerful forty metre run by David Worrall, they took the lead with a Phil Duboulay penalty. They might quickly have added to it but the final pass to Tom Shires on the wing went behind him. Shires would have had a clear run-in and he suffered exactly the same fate late in the game when again a try was there for the taking.

Westoe were having most of the early play. When their fly half Lewis Hagan broke through on halfway to romp through some woeful tackling and score under the posts it looked like being a case of déjà vu for Beverley. Hagan converted the try and Westoe led 7-3 after a quarter of an hour although Duboulay did soon kick a second penalty for Beverley to make it 7-6.

Only a spectacular last-ditch covering tackle in the corner by Luke Hazell prevented Westoe going further ahead. At 14-6 it might have been a different story. As it was, the tackle proved to be a defining moment in the match. Beverley had been steadily upping their game and it was they who got the next score which took them into the lead. Duboulay opted to kick to the corner with a penalty instead of going for goal. They won the lineout, moved the ball one way and then the other, and Chris Brant went over for Beverley’s opening try. After that they never looked back.

Five minutes later Beverley got their second when Westoe possession in midfield was turned over and Harrison Mayou sliced through from thirty metres to touch down. Duboulay missed both conversions in the gusty wind but on the stroke of halftime it was all as good as settled. A quickly taken tap penalty set up some exciting slick passing and Alex McPeake burst through to cross for a third try which Duboulay converted.

23-7 up at halftime. Given their season to date this was riches indeed for Beverley. In the second half they continued to grow in confidence and momentum and produced some scintillating movement, certainly better than anything we had previously seen this season. The forwards were well in control with Craig Hancock in particular having an outstanding game in the lineouts and the loose, as was Worrall who provided the experienced presence that the pack has been lacking all season.

Duboulay dropped a goal to stretch the lead and when the pack drove over from a lineout Beverley got the four try bonus point they were looking for, Worrall touching down and Duboulay converting. Westoe fought back strongly and ran the ball from anywhere but Beverley’s tackling was now sound and Westoe could make little headway. Both sides, it must be said, deserved great credit for their endeavour and entertaining rugby. But in the end it was Beverley’s day.

The win moves them off the foot of the table and Beverley are now well in the mix with three other clubs in the fight for survival. Beverley’s next fixture is in a fortnight when they meet Northern, another struggling side. If they can retain the commitment shown today there is no reason why they should not travel up to Northumberland confident of another favourable result.