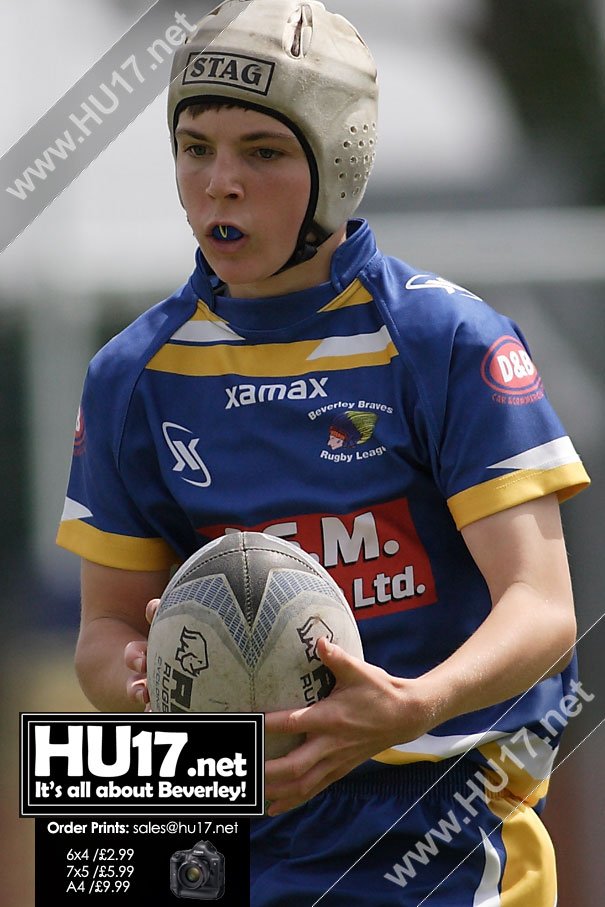 When the Beverley Braves met Hull Wyke earlier in the season, there were just four points between them, this time the margin of victory for Hull Wyke was just two points, but a draw would perhaps have been a fairer result.

Defences were on top throughout the game Will Swainston, George Bennett- Teare and Ethan Rowbotham, in particular, working hard in the forwards to keep the Wyke attack at bay in the early stages. Nine minutes in and it was still scoreless.

Henry Hughes kicked down field and the Wyke winger fumbled the ball to give a scrum just twenty metres out. Archie Murdoch, playing in the unfamiliar position to him of stand off went down the short side from the scrum before feeding the ball to William Wallis, who barged and battled his way through several tackles to touch down on the right-hand side to make it 4-0.

That score remained for some time, and crucially the Braves were not making mistakes despite a few changes having to take place, both Wallis and Rowbotham taking heavy knocks and having to come off. Oliver Loney moved from second row to centre to cover for Wallis, and defensively he plugged that gap well, working with his wing Tom Cohen whose defence complimented Loney. Oliver Gresswell came on for Rowbotham and put in his usual defensive effort.

Finally, Beverley did come up with an error and from the resulting possession Wyke got the score and with the conversion took the lead 4-6. Big prop Kai Johnson was introduced into the action which gave Beverley some great go forward just as they were beginning to tire and with Ben Hodder having an outstanding game at full-back taking all the high balls, chasing the kicks well and tackling anything that got through to him, the Braves were still in this game.

Lewis Egan was everywhere. He took the line on well and was leading the attack with his probing runs just as the half-time whistle was blown. Egan’s defence – just like half back partner Murdoch – was outstanding too.

Wyke kicked off the second half with Josh Pearson fielding the ball safely and putting the Braves on the front foot straight away. If that was a safe take his catch of a steepling bomb, a few minutes later was nothing short of brilliant.

The Braves continued to look for the next score. Harry Vorwerg had several half breaks causing the Wyke defence all sorts of problems whilst defensively he combined well with Ryan Deane to ensure nothing got past them on their wing. With nine minutes, remaining Wyke got the all-important score working the ball out left to squeeze over in the corner, crucially this try was converted, and Wyke had an eight-point cushion.

Beverley needed the next score, but Wyke moved the ball left again Ewan Morton superbly smothered the attack when faced with a three man overlap. This was a very brave try saving tackle from Morton, who left the field having suffered a broken collarbone. With just a couple of minutes remaining Jack Turner made sure the distribution of the ball was of high quality and another run from Johnson set up the position for Murdoch to dance his way over to the left of the sticks.

Turner added the extras but it was just not enough, a 10-12 defeat for the Braves but a much-improved performance. Egan, Hodder and Murdoch shared the man of the match award.