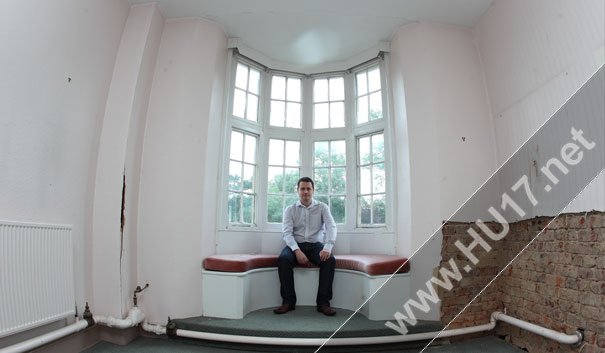 David Boynton who will be standing in the elections today Beverley Town Council in St Mary’s West took one last trip around the Beverley Westwood Hospital before the bulldozers moved in.

Mr. Boynton who will be standing as an independent candidate and a Psychiatric Nurse by day provided a guided tour of the many of the buildings that so many people in Beverley will have some good and maybe not so pleasant memories of.

Mr. Boynton spent what he describes three very happy years working on the site and was clearly moved as he walked the corridors for what he knew would be the final time ever.

The main building which was once a Workhouse is set to be converted by PJ Livesey into luxury flats, while other parts of the site have already been demolished ahead of the new build.

A selection of blocks on the site which were demolished to include the maternity ward where thousands of Beverlonian’s were delivered, the physiotherapy department, minor injuries, mortuary and the canteen.

“While it is sad to see all these historic buildings demolished it is nice to finally see the site being redeveloped and put to use.”

“During the time when I’ve been campaigning, I’ve spoken to local residents who have raised their concerns about the number of people that have been entering the site unauthorised since the NHS moved to the new Beverley Community Hospital on Swinemoor Lane.”

“I’m confident that the final results will be very pleasing to locals and those who reside close to the site. During the whole process, the developers have liaised with Beverley Town Council, The Beverley Civic Society East Riding of Yorkshire Council and also held open days and public consultations with the residents to ensure what is built is both tasteful and keeping tone with historical nature of the site.”

“It appears from what I know about the project that the developers have stuck to the plans and the number of lorries, and their size keeping the impact on residents during the building phase to a bare minimum.”

“Personally, I’m very very pleased with how the project has gone and to the best of my knowledge the ethics the PJ LIvesey has applied to the project. They have been very for full when it comes to bringing heavy wagons passed the school during certain hours reducing risks to children and parents.”

“I’ve enjoyed working partnership with this project and shows what can be achieved when both developers, and the local authorities work together on large residential projects.”

Mr. Boynton a member of Beverley Town Council since being elected 2014. It will be standing again in the latest round of elections, which take place on 7 May.