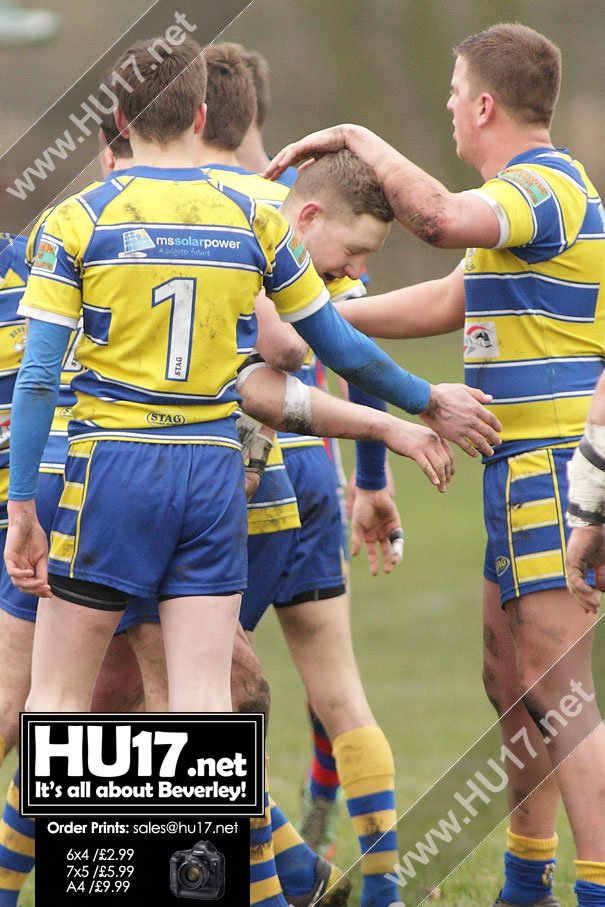 The blue and golds picked another two league points on their relentless quest towards signing off from the Hull & District League Division One as champions.

There were some outstanding individual plays in attack mixed in with a few sloppy moments in defence, which kept coach Pat Howdle and another large crowd on the edge until the final quarter of the game.

Alex Nightingale and Mike Cooper were unavailable due to work commitments. This forced a minor re=shuffle of the side with Steve Connolly switched to hooker from his normal loose forward spot and youngster Billy Riby got a start at full back.

The visitors were first on the scoreboard after five minutes taking advantage of some slack marker defence close to the line by Beverley. The try was scored from dummy half, but the conversion missed. The re-start kick bounced into touch immediately giving Beverley a set of six inside the visitors 20.

The pressure paid off with Jack Howdle going over from dummy half with Watkin converting. The home side with their tails up continued to press, and a spell inside the North Hull 20 saw Lewis Poskitt sidestep his way to a try for Watkin to again convert.

The visitors were a spirited oufit and one of their props were a constant thorn in Beverley’s flesh. He was on hand to score from close range to reduce the home sides lead to 12-10 with a converted try. The home side recovered their composure three minutes before the break after forcing a repeat set inside the visiting 20.

The resulting pressure ending in Glen Anfield’s astute long pass sending Ben Calvert over wide out. Watkin again added the extras. Some more lapses in concentration by the hosts allowed North Hull to score right on the stroke of half time. The extras were added, and Beverley had only a slender 18-16 interval lead.

The home side began the second half in buoyant mood and after a couple of promising raids on their opponent’s line, Steve Connolly was on hand to score from dummy half. Watkin converted. The visitors showed their frustration at this stage and were penalised for a high tackle. A resultant quickly tap was taken and Glen Anfield scythed his way through to score for the ever reliable Watlkin to convert. The hosts were keen to finish the job off, and some exciting attacking plays ended with Josh Pooley and Craig Morfitt both being held up over the line. The constant pressure finally paid off when Beverley ran a play on the last tackle and sent Jack Howdle over for his second with the extras added.

A plucky North Hull oufit pulled back a try before another burst of scoring in the final quarter by the home side. Lewis Poskitt showed great vision with his kick ahead exploiting the pace of Glen Anfield, who regathered to score another converted try. Moments later, an outstanding attacking play saw Lee Falcus take a tap from his own 20 feed Glen Anfield to take a return pass and feed Josh Pooley, who took the tackle close to the visiting line.

The field position was set up, and a smart blind side call from Guy Adams saw him feed Ryan Watkin, who in turn sent Ben Calvert over in the corner for his second. The failed conversion was Watkin’s only miss of the afternoon. With full time fast approaching the visitors coughed up possession in their own half. Jack Howdle gathered the ball and immediately kicked ahead to again exploit Anfield’s pace for him to regather and complete his hat-trick. Watkin added his eight goal of the afternoon.

Man of the match was Glen Anfield with his hat-trick catching the eye, but Billy Riby acquitted himself well in the full back position with one vital try- saving tackle. Furthermore, Lewis Poskitt was instrumental in most of Beverley’s attacking threats.
This Saturday Beverley has a tougher examination with a trip to Myton Academy kicking off at 2pm at the Marist Sporting club. Earlier in the season

Beverley lost narrowly 22-17 to the same side in the league at the Leisure Centre but knocked them of the Tom Beautiman cup 20-14 on their opponents own soil.