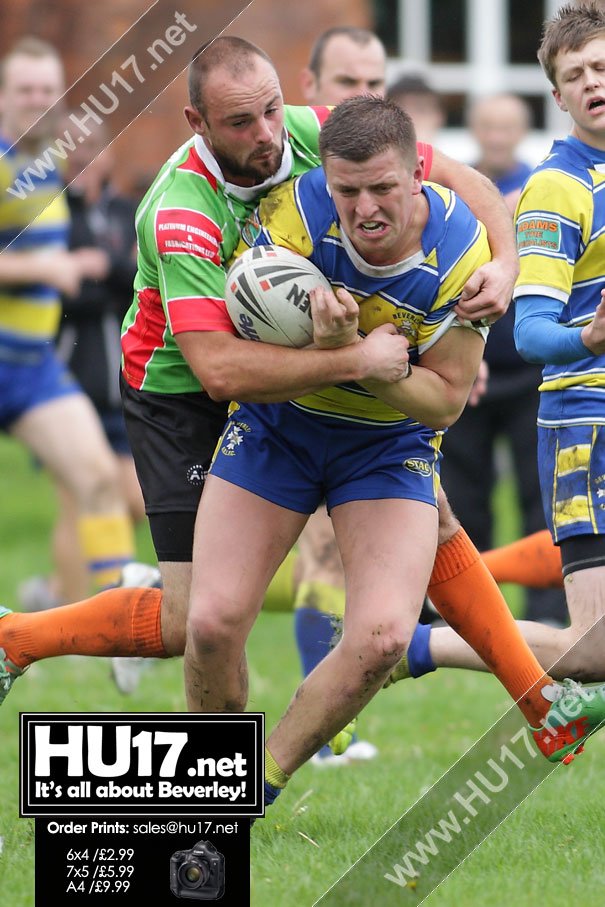 The blue and golds secured the perfect start to the season against their much fancied opponents at the Beverley Leisure Centre on Saturday. This was a landmark victory against a side containing several ex-West Hull National Conference players.

All 17 players that put a shirt on for Beverley deserve a huge pat on the back for this win. The hosts started nervously perhaps at first showing their opponents a little too much respect. The visitors dominated the opening 20 minutes and were on the scoreboard with a 10th minute unconverted try. Beverley struggled to get out of their own half and indeed struggled to make much ground with their sets of six.

However, things began to turn in their favour midway through the half. A break up the middle from Ryan Watkin saw him pulled by the full back him unable to utilise any support runners. Although it was the confidence, boost that Beverley needed. The addition of Louis Hubbard off the bench added much go forward to the Beverley pack. They got their rewards after a period of almost ten minutes of sustained pressure.

The ball was shipped from one flank to another but quick hand to the right saw deadly finisher Adam Robson go over wide out. Watkin added the conversion to give the home side the lead. They attempted to increase their lead just before the break with Craig Morfitt and Louis Hubbard both going close.

The second half saw Beverley come out in a buoyant mood. They went close to increasing their lead when Dan Clark was unlucky to lose the ball in the act of scoring. They did, however, stretch their lead when an incisive break from Mike Cooper saw him give a smart inside pass to the supporting Ryan Watkin. Watkin went over beside the posts and converted his own try.

The match then turned into a real arm-wrestle. The visitors attempted to pepper the home full back with a series of bombs which he proved more than equal to the task often returning them with interest. Indeed, Lee Falcus was a serious contender for the man of the match award.

Beverley’s kicking game was spot on on the day. Steve Connolly kicked intelligently often forcing the opposing full back to turn and chase. When the opposing attempted to run the ball back he was so often met with a wall of blue and gold. In fact, defence was an underlying theme all afternoon for the hosts as they swarmed around Ryder attackers all afternoon giving them very little time to settle. Certainly, fitness levels looked to have been upped several notches during the close season.

The 75th minute saw the home side finally seal both league points in an attritional second half. One of the many kicks downfield was chased by Adam Robson.

When the full back attempted to run the ball out Robson stole the ball in a one on one contest to score his second try wide out.
Watkin again converted.

Ryder added a late consolation score. Man of the match was Louis Hubbard, but he was pushed close by fellow forward Rich Etherington.

Outstanding in the backs was Lee Falcus but special mention must go to scrum half Billy Riby. At barely 18 years of age he was thrown a baptism of fire against a vastly more experienced and physically more mature opposition yet did not shrink from the task, especially in defence.

Beverley hope to keep up the good work this Saturday when they are away to Hull Dockers ‘A’ kicking off 2pm at Tower Grange.

Events also seem to be going well away from the pitch for Beverley as ticket sales for their third annual sports dinner at Lazzatts on 22nd November indicate the event will be the most successful yet. The guest speaker for the evening is Jamie Peacock of Leeds Rhinos and enquiries about tables can be made to Ian Pollard on 01482 679444.