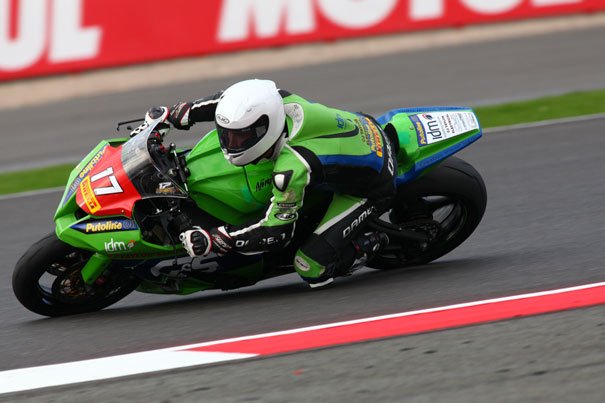 The two Superstock 1000 riders represented G&S Racing Kawasaki at the MotoGP meeting at Silverstone on Sunday where they were racing in a round of the National Superstock 1000 championship which ran as one of the support classes to MotoGP.

Both riders completed the race, Dom Usher ninth and Tom Fisher 25th. Usher was on a mission and completed his qualifying in 15th place and started the 12 lap affair from a fifth row grid position.

He made steady progress through the field making up a place on each lap until he reached 10th position on the penultimate lap. He made an extra effort on the final lap to take 9th place at the chequered flag to pick up seven championship points.

“Dominic Usher – I was happy enough with that result. My qualifying didn’t go quite to plan as in the first session, I was 11th but ended up 15th overall.”

“But I made good progress and picked up some more valuable championship points for the team.”

Meanwhile, Tom Fisher began the race for 29th position to set of from the 10th row. He too made progress moving through to finish the 12 laps in 25th place.

“Once the riders settled down the field began to stretch out and after reaching 25th place I rode a lonely race to the flag.”

“But it’s a finish, and I am getting more used to the big Kawasaki with every outing – although my injured hand is still playing up, which doesn’t help my cause.”

“It was nice to be able to say that both my riders completed the race. Dominic rode well and brought points back to the team.”

“A top-10 finish is very respectable in such a high-quality field of riders so I am happy enough with that. Tom also is beginning to make progress.”

“His injury does hamper him as his hand turns numb after a few laps, which means he doesn’t have the control over the machine that he would like. However, he is moving forward, and if we can get the injury sorted out, then the results will follow.”