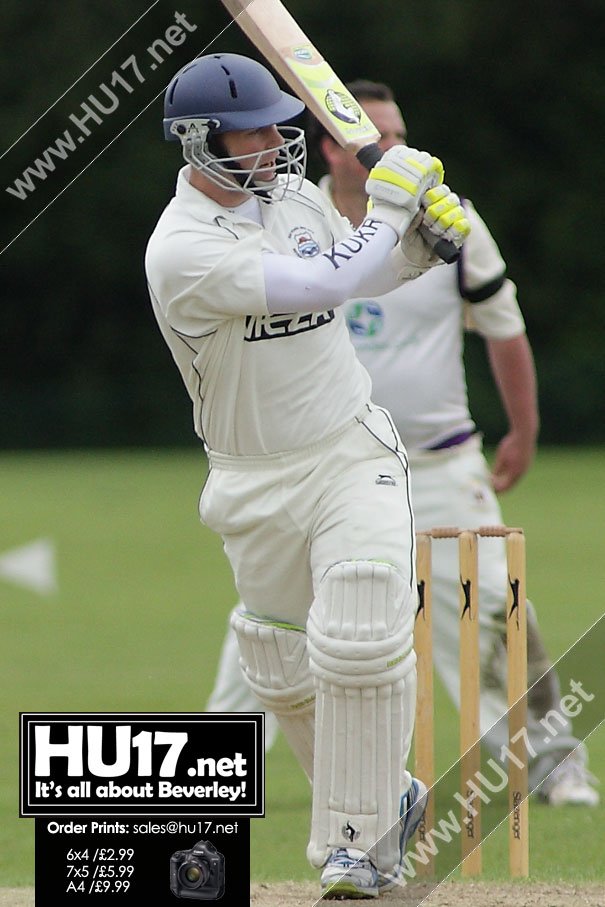 Captain Jonathan Fisher was very upbeat about the performance that saw the top order click and put what he feels was up there with their best performance so far this season.

“After losing the toss and getting stuck in to bat on a green pitch, we knew we had to dig deep to post a competitive score.”

“Our top six batted as well as we have done all year posting 204, Spence leading the way with a cracking knock of 89.”

“Although it was not a massive score, for the conditions and the pitch it was the equivalent of scoring 275+ at Beverley so I knew we had a massive chance for the full 30 points at the halfway mark.”

Beverley have been strong all season with the ball in hand and this game was to be no different, the experienced Matthew Mudd was very well supported by a youthful bowling attack.

Commenting on the bowlers the skipper said;

“Mudd lead a very young bowling attack but it was Keiron Thompson who got the early break through by clean bowling one of their openers, he went on to only go for 2 runs in his first 5 over’s.”

“This set the tone for the second half and Matthew Mudd then started getting into the wickets, followed by yet another tight spell of bowling by Jamie Roe.”

“Unfortunately, we couldn’t get the last two wickets to win the game outright but we all came off the field feeling like we’d won.”

“I don’t think Fenner were ever in the game at any point, we had complete control from start to finish.”

“The most encouraging part of the day was that our bowling attack were all juniors, Jamie Roe, Thompson and Bradley Graham.”

Fisher has made it clear all season that age is not a factor in picking his team and has backed this up already this season putting faith in a number of young players.

His faith in youth at the club was reinforced with the news that another on of Beverley’s bright young stars, Greg Whyley had reached a personal goal while playing for the second team at the Norwood Recreation Ground, he said;

“Getting the news just after the game that Whyley had scored his first 100 ever at just 16 years old is a fantastic sign of things to come in future years, I am sure everyone at the club will join me in congratulating him on fine performance.”