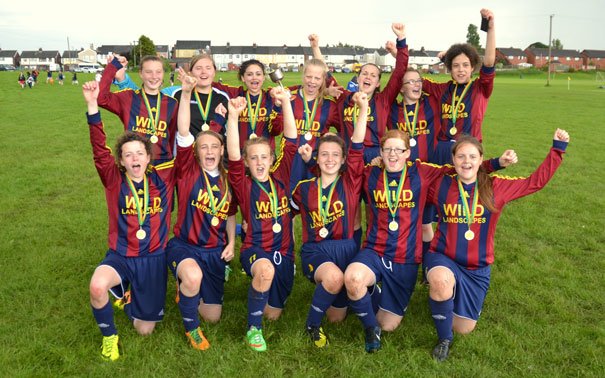 After four attempts and after getting beat 1-0 in last years final Mill Lane United Yellows finally added the Skelmersdale National Girls Cup to their list of honours.

As usual in this tournament the competition was fierce with Man City, Preston North End and the Yellows old advisory from the North East Cestria in attendance as Mill Lane looked forward to testing themselves against some good quality opposition from other parts of the country.

In the group games the Yellows steadily improved as the tournament progressed and topped their group with 4 wins and a draw scoring 6 goals and keeping a clean sheet themselves.

After topping their group the Yellows were paired against Preston North End in the semi final  after Preston had  beat the  formidable Cestria team in their last group game.

Throughout the tournament Preston had played some superb passing football and Mill Lane Yellows knew they had to step up on their performances from the group games and use the experience they had gained over the last 6 seasons against strong opponents.

Straight from the kick of the Yellows were on fire and within 5 minutes they had put the game to bed with 2 great goals.The first a brilliant 20 yard shot with her left foot from Charlotte Holliday after a run from her own half, and the 2nd soon followed after winger Tonya Storr left several defenders in her wake on a left wing foray before cutting in and sliding the ball under the advancing keeper.

Once in front Mill Lane dominated their opponents never giving them anytime on the ball as they advanced to their second consecutive Skelmersdale Final. Their opponents would again be the classy Cestria side from the North East and the Yellows knew they would have to raise their performance again to avenge last years 1 nil defeat.

The game kicked off in perfect conditions with both teams looking for the early advantage. Cestria had the better of the opening exchangers and Mill Lanes defence had to be on top form to keep Cestria at bay.With the sunshine been replaced by torrential rain the Yellows fought back into the game and by half time Cestria were glad to hear the half time whistle.

After 6 games for Mill Lane one last effort was needed from the Yellows and with the rain pouring down they chased, harried and out played Cestria and were rewarded for their efforts with a superb goal from Morgan Nagee, seemingly running down a dead end on the right wing Nagee cut inside to find space in the Cestria penalty area, still having plenty of work to do Nagees shot some how crept in at the far post  to give Mill Lane a 1 nil lead that they would not surrender despite the best efforts from their opponents.

The final whistle blew and the Yellows danced in the pouring rain as they celebrated a famous victory against one of the best girls sides in the country. So fourth time lucky at Skelmersdale for Mill Lane Yellows no goals  conceded in the whole  tournament ( in fact no goals conceded now in 15 games in the last 2 tournaments).

The whole squad was superb throughout the day with many excellent individual performances capped by Tonya Storr been named player of the tournament.