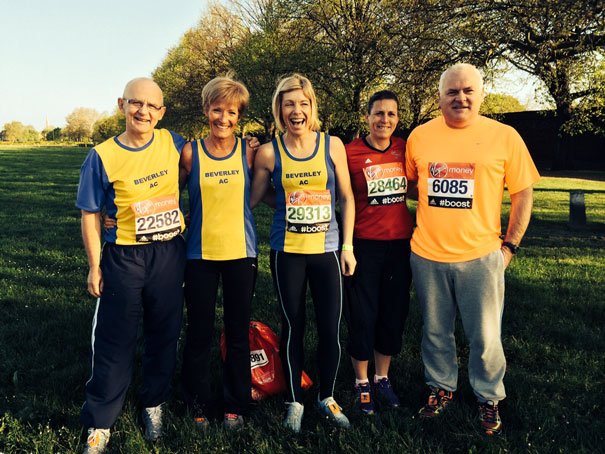 13 Beverley AC members joined over 36000 other runners and one of the strongest ever elite fields last Sunday for the 2014 London Marathon.

Some made their own way there and others teamed up with City of Hull AC who organise an annual coach trip for runners and friends and family supporters, which creates a great atmosphere amongst the group for the weekend.

All were relieved to wake and see the weather reports were accurate and glorious sunshine awaited their race. Although not excessively warm for spectators, the lack of a breeze certainly made it feel a lot warmer for the runners, as temperatures rose from around 11c at the start to around 16c by the finish and as much water was thrown over the head as down the throat
Any marathon is of course an amazing achievement but Beverley had some notable successes and stories to tell.

Paul Clark continued his quality performances coming in at 3:19:44. Sam Allen was delighted to finally beat her PB at London. She pulled off an amazing 3:24:02 to finish 98th in the Female 40-44 group. Another superb effort was achieved by Jacky Hardman. She came 46th in the female 55-59 category in a time of 3:54:10.

Pete Watkinson is a marathon expert par excellence having taken on many of the country and world’s major marathons. Into his 60’s he continues to defy the years and pull off some amazing results. He was 55th in the 60-64 male group in a time of 3:35:40.

Andy Grainger took on a special challenge in aid of his charity, The British Lung Foundation. He ran the Brighton Marathon the previous Sunday in 4:06:24 and followed it up at London with 4:07:38, much to his surprise and delight.

Other charity efforts included Chris Dunn who came in with a time of 4:30:02 in aid of Meningitis Research. Chris would normally beat this time by some margin but pulled his calf at mile 23, resulting in a slower than usual time.

Lucas Meagor is aiming to get to his 40th Marathon in his 40th year and has a few to rack up this year to achieve that. He is aiming to raise money for Sport Relief, Tree of Hope and The British Paralympic Association. He donned his customary cowboy outfit and felt the heat to finish in 4:40:48.

Jeorg Hardege has struggled with injury but trained hard to achieve an improved time of 4:41:59 and Trevor Turnbull managed a sub 4 in 3:59:04.
The atmosphere at London never fails to amaze. A wall of noise greets you for the vast majority of the course, especially at The Cutty Sark, Tower Bridge, The Tower of London and of course on Birdcage Walk and on entering the Grandstand area at the finish. Time seems to fly by as you look around to take it all in and London seems to go a lot quicker than most marathons.

As ever there was much to talk about as the Beverley and Hull crew enjoyed a few celebratory beers on the Mall after and a few rushed off to see Hull City reach their first FA Cup Final at Wembley!

Also, the club would like to remind you that there are still a few places left for the fun run at this year’s Beverley 10k.