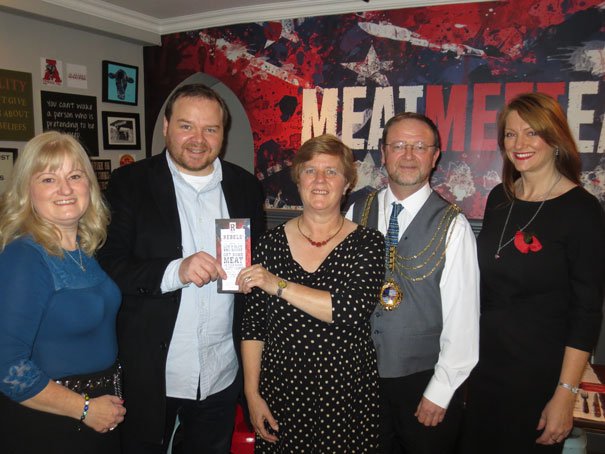 The lucky winner of the Beverley Food Festival 2013 prize draw has been announced.

Local resident, Mrs Jacky Kennington, has won the prize which is to ‘Eat Like an Army’ for up to eight people, worth £120, courtesy of Rebels’ Smokehouse in Beverley.

Jacky was one of the many visitors that entered the Festival’s free prize draw by completing a Feedback Form and answering questions about the event, which was held on Sunday 6th October in Saturday Marketplace.

Describing how she felt when she was told that she had been selected as the prize winner, Mrs Kennington said: “I was astonished and delighted to hear the news that I had won the prize. I am looking forward to sampling the authentic tastes and flavours that Rebels’ Smokehouse offers”

Jacky continued: “I feel that it’s important to support local events such as the Beverley Food Festival, to attract the range and variety of local producers that events like this draw to them. I think that the Food Festival is good for the town, its residents, and brings in tourists, which all boosts the local economy.”

Presenting the prize on behalf of the Town Council, Mayor of Beverley, Cllr Martin Cox, said: “I am pleased to present Jacky with this prize, which was so generously donated by Jason Rowe of Rebels’ Smokehouse. I’m sure that she is very much looking forward to bringing her seven guests to eat and enjoy the delicious food on offer.”