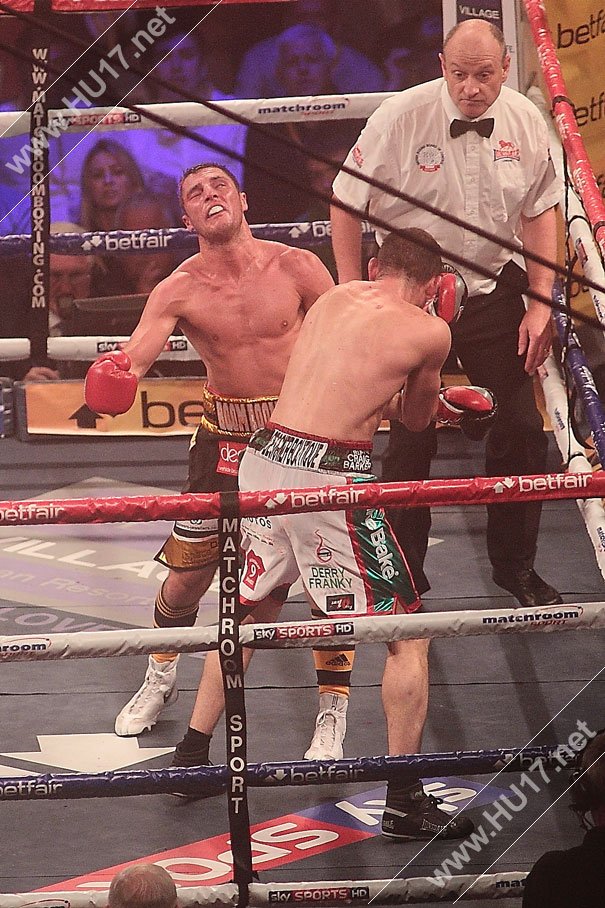 When Hull’s Tommy Coyle made his long walk to the ring at MS3 Craven park to the tune by The Outhere Brothers, Boom, Boom, Boom the place quite literally erupted.

Coyle must have felt he was carried into the ring by the thousands of fans who had turned out to support their own fighter in the biggest fight of his career to date.

Waiting for Coyle in the ring was Derry Matthews, who too was well supported by large section of fans who had travelled over from Merseyside to back their man in the title fight.

Both fighters went into this fight wanting to win the Commonwealth Lightweight Title and if anything Matthews went into the bout as slight favourite.

In the build up to the showdown at the MS3 the pair were embroiled in few scrapes on social media with words being exchanged between to the two fighters at the press conference and weigh in.

Whatever their disputes outside the ring both men were about to be judged on one thing and one thing alone, their skills as professional boxers, and boy did they put on a show.

Coyle took the fight to Matthews from the first bell, in fact, he battered Matthews for most of the contest and as he done so it increased the atmosphere inside the stadium.

As the rounds passed it was clear that Coyle was ahead on points, even the Matthews fans must have feared the worst as the rounds flashed by and Coyle continued to pile on the pressure.

To win a boxing contest you either have to outscore, knock out or the referee has to step in and stop the fight. I have no idea what was going through Matthews mind as he came out for the tenth round.

I would guess that his corner had told Matthews he needed to knock Coyle out if he wanted to win, and that he was too far behind on points for that to be an option.

In the tenth round Coyle just carried going on about his business, working hard landing punches, then out of the blue Matthews landed the thunderbolt of the shot sending Coyle to the canvas ending the fight.

Although Coyle got back to his feet, the referee had very little to choice to stop the fight ending Tommy Coyle’s title hopes, for now.

After the bout, Matthews was full of praise for Coyle, he said he was getting battered. Matthews also added he knew he had a powerful punch.

Top boxers have been full of praise for Coyle, including Ricky Hatton who tweeted “Tommy Coyle will come again. He’s young. He proved his class, and that’s he’s got it in him to compete at that level.”

Coyle has certainly made a massive impact on the boxing world, and Matthews has shown that when the chips are down, he can pull it out the bag and deliver a killer shot which most fighters in his class will struggle to cope with.