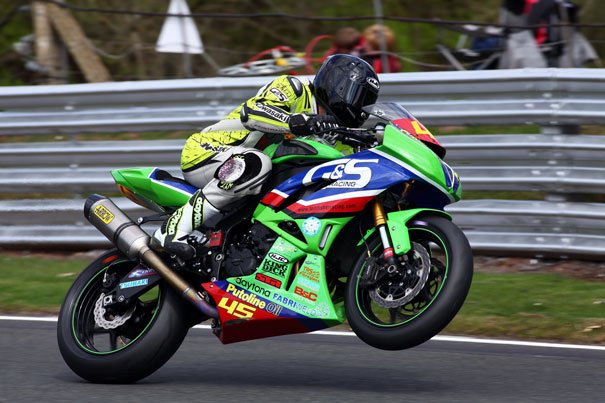 The riders were unfortunate to miss the free practice session because of wet and slippery conditions as with the forecast for hot and sunny weather over the next two days there was nothing to be gained in free practice in the rain.

Nottingham rider Tom Fisher was looking promising in first qualifying which he completed in sixth position. But the injuries he picked up from his crash at Thruxton a couple of weeks ago began to take effect and this combined with the warm weather and the undulating Oulton Park circuit saw him complete his final qualifying session in 14th place leaving him to begin his race from a fourth row grid position.

The National Superstock 600 class is highly competitive and although Tom posted his fastest times ever around the Cheshire circuit he could not keep up the pace of the front runners. As the race wore on he began to suffer with arm pump and was considering pulling in to retire but persevered and was rewarded with a 14th place finish and two championship points bringing his total to 11 after three of the 12 rounds.

Tom Fisher – Oulton is a high speed circuit and is hard on the arms. I am still recovering from my off at Thruxton and this combined with the heat of the day on Monday caused me to have a few moments out there. However I managed to bring the bike home safely in the points so I have to be happy with that.

Dominic Usher from Beverley suffered a technical issue in final qualifying which left him to start the race from the back row of the grid in 38th position. He faced a monumental challenge to make headway through the field but, undeterred, he got his head down and began the task of reeling in the riders ahead of him. It was his first time on the Kawasaki at the Cheshire circuit and also the first race using the new Bitubo suspension and despite being hampered by the back row start he made up a lot of ground posting lap times comparable to the top 12 riders to complete his race in 22nd position.

Dominic Usher – It is quite a daunting task to try and make up ground from the back row but once we got going I settled into the race and began to pick off the back markers until I reached 22nd place. I simply ran out of laps and had to settle for that but I am encouraged by my lap times and was circulating at the same pace as the riders who finished in 10th and 11th places. Looking at the time sheets I recorded the 12th fastest lap time of the race and have gone quicker here than ever before so that is promising.

For Stockport rider Dave Ferns it was a matter of laying the ghost. It is exactly a year ago that he crashed and broke his shoulder here at Oulton Park which put him out of racing for the remainder of the year. After posting his personal best time at the circuit of 1m 41.4s during qualifying he began the race from 36th place on the grid. He battled throughout the 15 laps with TT star Bruce Anstey passing him at the midway stage of the race to finish in 29th place.

Dave Ferns – It was not perhaps where I wanted to finish but I had a good battle with Bruce Anstey and am delighted to have beaten such a prolific ride. I have certainly laid the ghost this weekend and posted my best ever times at Oulton so am quite content with that.

Team Manager Mark Fisher – We came to Oulton Park with high expectations but it didn’t really come together for us. We had a few issues to overcome and also lost track time by missing the free practice sessions but we experienced an enjoyable weekend which has given us the confidence to move forward in the next round.

The next round is at the team’s home circuit of Donington Park where both classes will be in action as part of the support package at the World Superbike event over the weekend of May 24-26. All three riders, especially Tom Fisher usually go well at the Leicestershire circuit and they are all confident of bringing some strong results back to the team.