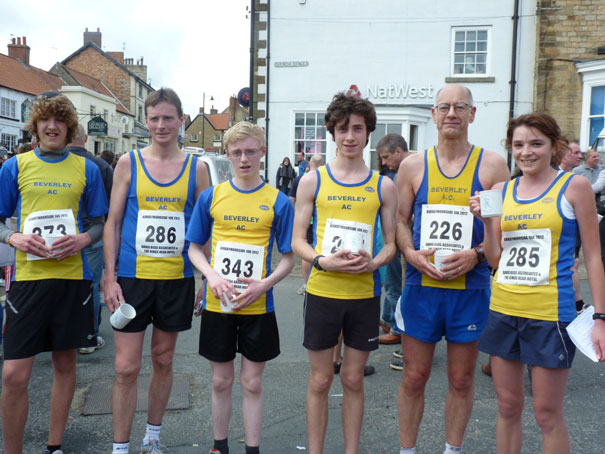 There was a good turnout by Beverley Athletic Club Juniors in the twelfth Kirkbymoorside 10k and fun run last Sunday. They had a choice of 1 mile, 5k and 10k distances and the hilly terrain tested them all.

Teenagers Harry Powell and Conor Spilsbury both recorded excellent times in their debut 10k and show great promise for the future. Powell finished in the top 50, was the third Beverley man to complete the course and crossed the line in a very impressive 41:25. Spilsbury followed in 43:00.

Fifteen year-old Ethan Dalton had a great run and knocked almost a minute off his previous best time at this distance to finish in 41:39.

Other Beverley Juniors in the 10k included Nicole Dawson and siblings Kelvin, Curtis and Kendall Arnott. All ran well and gained valuable experience on a challenging course. The first 4k was uphill on rural roads passing through the villages of Gillamoor and Fadmoor but runners enjoyed the very fast downhill finish to the market place in Kirkbymoorside spurred on by the local brass band.

Taylor Arnott ran the 1-mile race, finishing in a commendable 7:21 and in tenth place.

Dayna Arnott and Kelly Dawson represented the club in the 5km race. They finished very close together in 14.42 and 14.43 respectively and were the second and third females to cross the line.

Juniors’ coach Neil Sergeant was joined in the 10k by the fathers of two of the juniors – Mark Dalton and Mark Dawson. Dalton was the first Beverley runner to finish followed by Dawson. Overall they finished in 12th and 24th place respectively.