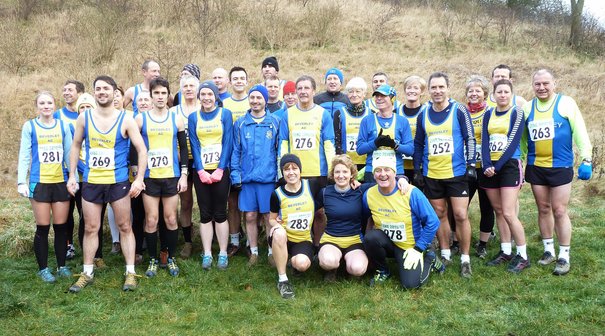 It was a bright, cold and frosty morning last Sunday for the fourth race in the East Yorkshire Cross-Country League. The ground underfoot was very hard and when the ice began to thaw it became very slippery. Courage was needed to descend the steep valley side to the finish in the village of Thixendale. A number of runners slipped and fell but there were no serious injuries.

James Pearson was first to finish for Beverley and seventh overall in 44:07. He was followed closely in eighth place by Matt Chadwick making a welcome return to the team after taking a six week break from running after the birth of his daughter. He was pleased with his comeback race and thought the hard frosty ground suited the faster runners. Although he was overtaken by clubmate Ross Flood and City of Hull’s Pete Baker on the mid-section along the Wolds Way he passed them both on the steep downhill leading to the finish, beating Baker by two seconds. Flood followed in tenth place and the rest of the team scoring points for Beverley was made up of Stuart Little, Jim McGivern and Steve Ostler.

Eliott Haker showed promise in his first appearance in a Beverley vest and added depth to the men’s squad. He was 39th overall and the ninth Beverley runner to finish.

For the second race in succession Beverley’s Carla Stansfield was the first lady to finish. She completed the course in 43:27 two minutes ahead of her nearest rival, in 22nd place overall and was the sixth Beverley runner to cross the line. Sam Allen and Julie Donald completed the team. They all finished in the top twelve ladies.

Beverley’s men’s and ladies’ teams both finished in second place at Thixendale behind City of Hull, mirroring their standing in the league overall. Many runners are training for marathons in London or in Hull in April and for various reasons do not include the cross-country league in their programme. City of Hull are making a determined effort to win the men’s and ladies’ cross-country titles and are actively encouraging their members to turn out. At Thixendale they fielded a very strong men’s team with six of them finishing in the top ten while Beverley managed only three. Beverley’s Matt Chadwick conceded: “It was a valiant effort but we were beaten by a much stronger team. We also had a few notable absentees from the previous races which hampered our chances in closing the overall gap.”

Beverley seem secure in second place in the men’s league and can only mount a serious challenge to City of Hull if they field their strongest team.

The ladies’ competition is more open with Bridlington, Driffield and Scarborough not too far behind Beverley. A lot depends on the runners that turn out for the remaining two races at Welton and Sewerby.

There were 179 finishers at Thixendale and the race was won by Stuart Carmichael of City of Hull in 36:57. The first lady was Beverley’s Carla Stansfield in 43:27.