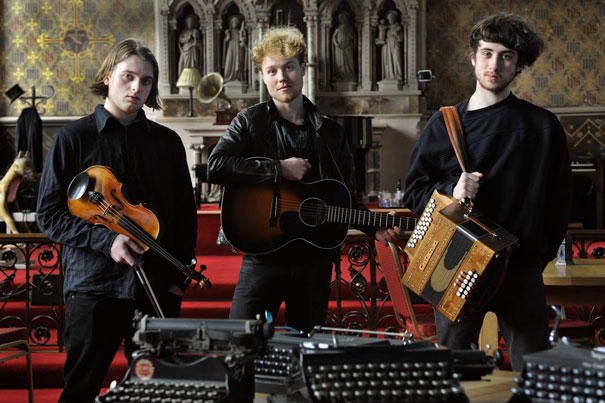 Beverley Folk Festival has an enviable reputation of both spotting new talent and also nurturing young artists.  Nowhere is this more evident than with Moore, Moss and Rutter, the 2011 BBC Radio 2 Young Folk Award Winners and producers of The Telegraph’s Best Folk Album in 2015.

The trio have gone on to great acclaim for their reworking of traditional native English tunes and songs into something far more contemporary.

As with every new generation of musicians, they aim to breathe life back into ancient material and their music has been described by Songlines Magazine as “achingly beautiful”.  They have also received national airtime, with Verity Sharp on BBC Radio 3’s Late Junction praising them for “giving English traditional music the love and respect it deserves, with dreamy reinterpretations”.

Festival Programmer, Kelly Foley, explained: “We’re extremely proud of our Area 2 Youth Programme, which continues to showcase some of the best young talent from across the country. We love to keep up with what musicians who come through it are doing and that’s why we’re delighted to welcome Moore, Moss & Rutter back to the festival in 2017. Tom, Archie and Jack met at Area 2 and have gone on to great success. We can’t wait to see them again on the main stage next year.”

Area 2 is organised by musician Sam Pirt and features music and sessions from some of the finest young musicians in the UK aged between 12 and 25.  It is a stage for the second generation of singers, musicians, bands that are just coming onto the folk scene, and a part of the festival where audiences can see fresh, vibrant young musicians that are passionate about the music they make.

In recognition of his commitment to supporting young musicians, Sam, who is also one half of the group The Hut People, recently won the ‘Outstanding Contribution’ award at the Yorkshire Gig Guide Awards 2016.  Many of the artists he has showcased on the Area 2 stage have gone on to become professional musicians and happily acknowledge Beverley Folk Festival as playing an important part of their formative careers.

Beverley-based musician Sarah Shiels took to the Area 2 stage in the past as part of The Velvet Dolls.   She said:

“Performing at Area 2 was a fantastic experience and one I will always remember. I have been volunteering and working with the festival for a while now and it was an honour when Sam asked us to headline the Area 2 stage.  Playing to a packed venue all dancing away was really cool, and it really gave us a confidence boost due to the positive feedback we received. We had many people saying we were a highlight of the weekend, which was a lovely feeling when many established and high quality artists were also part of the festival line-up.  I couldn’t recommend it more.  Since then, I have gone on to play around the UK and even in America. You never know where these experiences can take you!”

Summing up the celebration of new voices and return of old faces, Festival Chairman Matt Snowden said: “It is fantastic to welcome back Moore, Moss and Rutter to the festival at which they met.  They are a remarkable group of musicians and a great example of the very best of the new generation who are making real waves both within the folk scene and beyond.

Beverley Folk Festival is committed to not just programming well-established stars of the folk music scene, but also nurturing and helping young musicians as they start of their careers.  The styles of music may change over the years, but it keeps the tradition alive and does what folk music is meant to do – give people a voice by expressing themselves through songs.  Area 2 is a vital part of this and we are constantly indebted to Sam Pirt for his commitment and hard work to helping us achieve this.”

Tickets for Beverley Folk Festival 2017, including a special seasonal discount, are on sale now at www.beverleyfestival.comand with Christmas approaching would make a great gift.

Children aged under 12 get in free and there are discounts for young people aged 12 to 18.