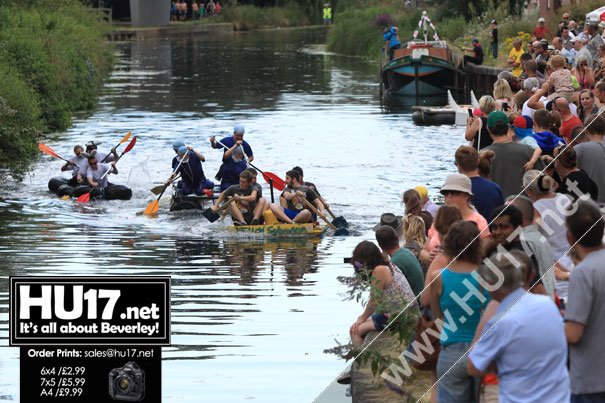 The N.U.R.S.E. Charity will be holding their fourth Annual Raft Race, on the Beverley Beck, Beverley, East Yorkshire, on Saturday 25 July 2015.

With over 15 rafts confirmed for the event, this year’s event will be bigger and better than ever before.

Peter Watson, a Trustee of The N.U.R.S.E. Charity said:

“We’ve never had such interest in ourRaft Race Event, already twice as many rafts are confirmed than last year’s event. We thought that last year’s event would be hard to beat, but certainly we appear to be talk of the Town at the moment!”

“This event has become increasingly important in our annual charity fund raising efforts, with last year’s event raising well over £1,000 which is incredible.”

Teams dress up in fancy dress and some spend months perfecting the rafts, last year’s winners ‘The Ghost Busters’ styled their vessel like ‘Ecto-1’ the Ghostbusters vehicle, with the four team members wearing Ghostbuster overalls.

This year the event is being officially opened by Beverley & Holderness MP Graham Stuart, who commented;

“I am extremely proud to have been asked to open this year’s Raft Race event and Judge the ‘Best Turned Out Raft’. The N.U.R.S.E. Charity makes a tremendous contribution to the lives of the people of Beverley and the surrounding area when they need it most.”

There will also be a food van, ice-cream van, craft stalls, face painting, a Bar-B-Q at the Foresters Arms and the Star Wars Characters from The Rebel Legion UK will also be making an appearance. With live music on board the Syntan Barge and in front of The Foresters Arms, it should prove to be a carnival atmosphere.

Crowds at the last raft race reached in excess of 500 and with the interest being shown, it is anticipated that this year’s event will be busier than ever.