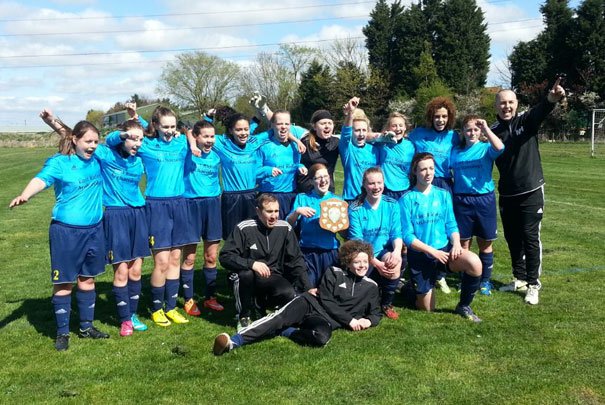 For the side, this was their last fixture, they will play as a side in the Junior leagues, and they certainly went out with a bang.

Straight from the kick off the Yellows showed desire and determination in a fantastic display of football showing why they have been the dominant team in their age group.

Mill Lane United Yellows took the lead after 10 minutes when Emma Johnsons through ball released striker Morgan Nagee to finish with a deft left foot shot for her 32nd goal of the season.

This settled Mill Lane, who started to play some of their trade mark passing football and further goals followed before half time, the second a bullet header from Neave Spriggs after a pin-point corner from defender Charlotte Holliday and the third a clinical finish from winger Tonya Storr after another through ball from Captain Emma Johnson.

The second half started in explosive fashion as in the first minute Tonya Storr chased the ball into the Hessle Town area and capatalising on a defensive mistake to put the Yellows 4-0 up.

Hessle were shell shocked as Mill Lane United Yellows poured forward and further goals followed in a clinical performance from Mill Lane Yellows two more from Storr to give her four in the match, two from Captain Emma Johnson and one for striker Morgan Nagee to give her a brace in the game.

Hessle Town for their part kept on battling to the end, but just had no answer to a Mill Lane Yellows team that was in no mood to relinquish their League title.

The final whistle blew, and the team celebrated an amazing 7th successive league title after the best team performances of the season were the whole squad performed to the highest level giving them a League and Cup double.

The team now look forward to chasing the Treble and playing what will be their last game together in junior football next Saturday when they meet their club rivals and only team to beat them this season league runners up Mill Lane United Blues in the County Cup Final at Inglemire Lane.

Man of the matches could have gone to a number of players after a superb team performance, but were given by Hull City Ladies representatives to defender Charlotte Holliday who was outstanding throughout and winger Tonya Storr for four goals in a rampaging performance full of energy.